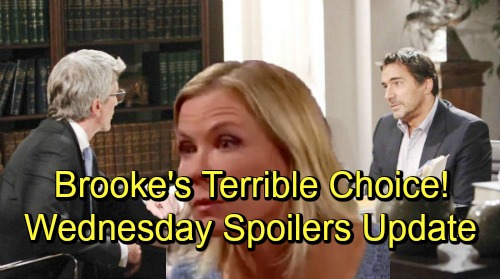 The Bold and the Beautiful spoilers for Wednesday, October 10, tease that Steffy (Jacqueline MacInnes Wood) will corner Ridge (Thorsten Kaye) and try to get to the bottom of what’s going on with him. Steffy can see that clearly something is wrong, and she suspects that it has something to do with his relationship with Brooke (Katherine Kelly Lang).

Steffy knows that the past few weeks have been trying for Brooke and Ridge. Ridge’s decision to fund Steffy’s Intimates line over Hope For The Future was a real sticking point in their marriage, and Brooke was very vocal about her opposition to Ridge’s decision. That left their marriage in a weakened state, and now Steffy suspects that something else has happened to cause further conflict.

What Steffy doesn’t know is that Ridge pressured the judge in Katie (Heather Tom) and Bill’s (Don Diamont) custody case to rule against Bill, and that Brooke has just found out about it. This is causing another major rift between Ridge and Brooke, but Ridge will probably brush off Steffy’s questions. He won’t want to admit to Steffy that he engaged in judge tampering. As far as he’s concerned, the fewer people who know about that, the better.

Meanwhile, on the new B&B episode on Wednesday, October 10, Brooke will try to come to terms with the knowledge that Ridge pressured Judge McMullen (Joe Lando) by calling in an old favor. Ridge begged her to keep his actions a secret, and she knows that if Ridge’s actions come to light, Ridge could go to jail. As mad as Brooke is at Ridge, she won’t want that to happen.

But yet Brooke won’t feel right about letting the judge’s decision stand in light of what she knows. B&B spoilers say that Brooke will battle intense guilt about keeping Ridge’s manipulation of the judge from Bill. She’ll feel a great injustice has been done, and she’ll want to do her part to rectify it. But if she tells Bill she knows that all hell will break loose and it could compromise the inroads that Bill has recently made with Will (Finnegan George). She’ll be in a real bind.

It sounds like we’re in for some great scenes on Wednesday’s episode, so stay tuned! We’ll give you updates as B&B news comes in. Stick with the CBS soap and don’t forget to check CDL often for the latest Bold and the Beautiful spoilers, updates, and news.