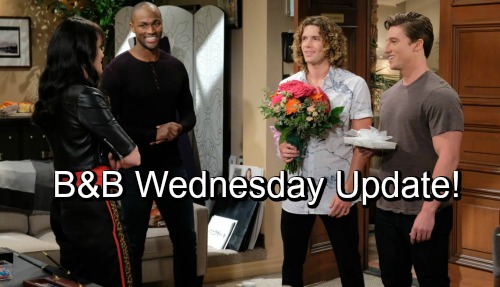 The Bold and the Beautiful spoilers for Wednesday, October 24, tease that Ridge (Thorsten Kaye) and Thorne (Ingo Rademacher) are going to be in hot water with their wives. Brooke (Katherine Kelly Lang) and Katie (Heather Tom) have just arrived at the hospital, where Bill (Don Diamont) is being treated after falling from a balcony at his estate during a scuffle with Ridge.

Brooke and Katie will be horrified as they hear more about the events leading up to Bill’s fall. B&B spoilers say that both women will be upset and disappointed in their husbands’ behavior. They’ll both argue that Ridge and Thorne had no business getting all worked up and then going over to Bill’s to cause trouble.

While Brooke blasts Ridge for causing Bill’s fall, Katie will be particularly upset that her son’s father might not make it. She has seen firsthand Bill’s recent turnaround and his newfound connection with Will (Finnegan George), and it will break her heart that Will may lose his dad. Look for Katie to lay into Thorne for being a part of the events that led to the fall.

Meanwhile, on the new B&B episode on Wednesday, October 24, Quinn (Rena Sofer) will get a reprieve from her feud with Pam (Alley Mills). At Forrester, model Danny (Keith Carlos) will introduce Quinn to Tyler (Tyler Crispen) and Brett (Brett Robinson), who will offer special gifts to Forrester Creations.

Tyler and Brett were houseguests on Big Brother 20, a CBS reality series, and will be making a special appearance on Wednesday’s episode of B&B. This will not be the first time that Big Brother contestants have appeared on B&B, but historically the contestants have appeared in passing in small roles such as waiters. It looks like Tyler and Brett’s appearance will be a bit more substantial, as they’ll be interacting directly with Quinn