The Bold and the Beautiful Spoilers: Wyatt Fears Ridge’s Next Deadly Move – Will Bill’s Rival Pull The Plug? 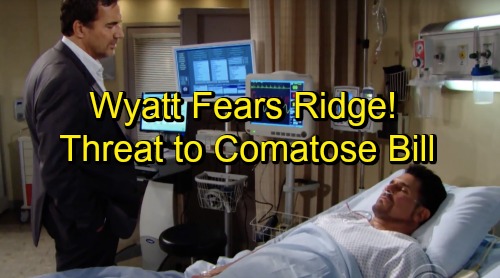 The Bold and the Beautiful (B&B) spoilers tease that Wyatt (Darin Brooks) will fret along with the rest of Bill’s (Don Diamont) family. Bill isn’t the easiest person to love, but they somehow manage to do it. It tends to get a little easier when Bill’s hospitalized and near death – which happens more often than any of them would like!

Of course, Ridge (Thorsten Kaye) won’t be sorry about the balcony chaos or Bill’s injuries. Despite the grim diagnosis Bill receives, Ridge will have no remorse. He might pretend he does for Brooke’s (Katherine Kelly Lang) sake, but he’s still furious to care about Bill’s fate.

Wyatt will sense that, so he’ll grow concerned when Ridge makes a request. B&B spoilers say Ridge will ask for a moment alone with Bill. He’ll probably lie that he wants to apologize and let Bill know he’s rooting for him. Of course, Wyatt won’t believe that for a second. He may fear that Ridge will try to pull the plug while he’s in there!

Fortunately, it’s doubtful Ridge will strike again. He did enough damage in that vicious brawl! However, that doesn’t mean Ridge’s visit with Bill will be remotely close to tender. The only emotions that’ll come into play will be negative ones.

Ridge will continue to battle rage and resentment issues. He’ll do some taunting by Bill’s bedside, which could be a problem if his comatose rival can hear him. Bill’s doctors won’t have much hope for Bill’s survival, so Ridge will gloat about it. He’ll invite Bill to wake up knowing full well that it’s unlikely.

The Bold and the Beautiful spoilers say Bill won’t regain consciousness just yet, but it’s coming. It looks like Brooke may be the one to make it happen. She’ll stop by Bill’s hospital room next week and beg her ex to pull through.

Sooner or later, Bill will come out of his coma and plot his revenge. He could easily accuse Ridge of murder and hope he rots behind bars. Bill may recall hearing Ridge’s nasty comments while he was unconscious. He’ll certainly remember all the nasty ones from before their out-of-control fight.