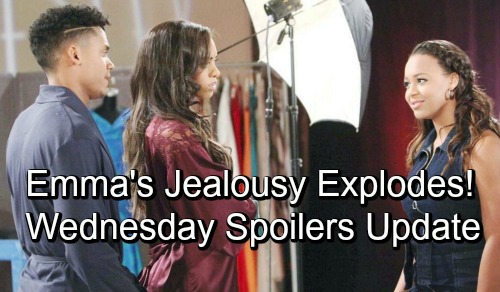 The Bold and the Beautiful (B&B) spoilers for Wednesday, October 3, tease that Bill (Don Diamont) will stop by to see Liam (Scott Clifton). It seems the custody case has caused Bill to reflect. He truly wants to be a better father, even to his grown children. Bill’s certainly hurt Liam and Wyatt (Darin Brooks) with his manipulation, but he’ll hope to undo some of the damage eventually.

Wyatt tends to go easy on Bill, so he’s not a real problem here. Besides, Liam’s the one who had his relationship derailed. He’d be with Steffy (Jacqueline MacInnes Wood) right now if it weren’t for Bill’s scheming. Nevertheless, Liam’s found happiness again with Hope. That should help as Bill works to make amends on Wednesday.

Of course, Liam and Bill can’t repair their bond overnight. The best Bill can wish for is a step in the right direction. The Bold and the Beautiful spoilers say that wish will be granted. Liam will share a tender moment with his dad, so that should be nice to see.

Once Kelly wakes up from a nap, Liam will even let Bill hold his granddaughter. There was a time when Liam wouldn’t have considered that, so this is indeed positive progress. While Bill and Liam get sappy, there’ll be some explosive conflict going on at Forrester Creations. Steffy’s intimates line will have a photoshoot, but the models will cause major drama.

The Bold and the Beautiful spoilers say Emma’s got baggage when it comes to envy. She’s been down this jealous road in her previous relationships, so that could be a factor. However, B&B fans can tell what Zoe wants. She’s obviously trying to seduce Xander, so Emma’s concerns are warranted.

It looks like this love triangle’s about to get messy! We’ll give you updates as other B&B news comes in. Stay tuned to the CBS soap and don’t forget to check CDL often for the latest Bold and the Beautiful spoilers, updates and news.