The Bold and the Beautiful Spoilers: Wednesday, September 26 Update – Ridge Vows To Help Katie – Bill Pleads With Sons For Support 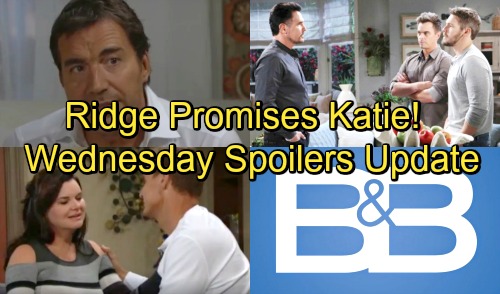 The Bold and the Beautiful spoilers for Wednesday, September 26, tease that Katie (Heather Tom) and Thorne (Ingo Rademacher) will bask in the glory of their beautiful wedding day, but Katie will have some fears about the upcoming custody battle with Bill (Don Diamont). She’ll wonder why everything has to be so complicated, but Thorne will reassure her that everything will be ok.

Meanwhile, as he decompresses from the wedding, Ridge will reflect on everything that Bill has done to harm his family in the past. He’ll note that there isn’t one member of his family that Bill hasn’t scarred in some way. Ridge will feel that it’s time that Bill pay the price for what he’s done, and that it’s time to protect little Will (Finnegan George) from being scarred any further.

Ridge will again vow to do anything he can to make sure that Katie gets full custody of Will. Of course, viewers know that Ridge has been pressuring the presiding judge in the case to find in favor of Katie – a big legal no-no. So far, Judge McMullen (Joe Lando) has pushed back and says he doesn’t like the position Ridge is putting him in. So, will Ridge intensify his pressure on the judge?

Next, on the new B&B episode on Wednesday, September 26, Bill will have a visit with Wyatt (Darin Brooks) and Liam (Scott Clifton). Bill will feel like he has to do something to help turn the tables in his favor in the custody case. B&B spoilers say that he’ll plead his case with his sons. He’s got Wyatt testifying on his behalf, and he’ll probably want to make sure that Wyatt will say the right things that portray Bill as a good father.

Bill will also try to persuade Liam to get on board with his side of the case. Liam has been subpoenaed to testify for Katie, so Bill’s naturally worried about what Liam’s going to tell the judge. Bill will want Liam and Wyatt to present as a united front on his behalf, and he’ll try to guilt Liam into changing sides. But will it work?