The Bold and the Beautiful Spoilers: Donna Logan Wants Eric, Sinister War Kicks Off – Quinn Turns Back to the Dark Side 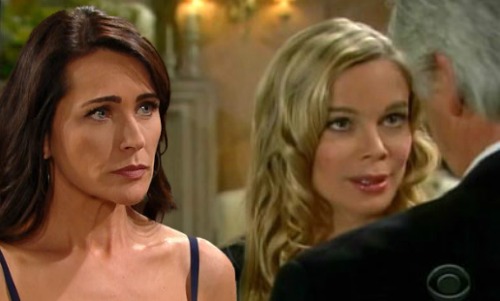 The Bold and the Beautiful (B&B) spoilers tease that we’ll be seeing a lot more of Donna Logan (Jennifer Gareis) on the CBS soap. B&B fans know Donna sightings have been pretty rare over the past few years. She usually only pops up for weddings, holidays and other family gatherings. However, that’s going to change in the near future. Jennifer Gareis is back on contract, so she’s gearing up for a hot story.

Gareis recently sent out a tweet to share her enthusiasm. She posted a pic of herself outside the studio and suggested she was ready to roll. Gareis exclaimed, “#Donna is back!! So excited for this new #adventure! I can’t wait to find out my #storyline!! What do you want to see?”

It sounds like The Bold and the Beautiful’s keeping a tight lid on whatever they have in store. Donna’s hot plot must be juicy if it’s so hush-hush. What could be cooking up behind the scenes? There’s one storyline possibility that many viewers would like.

Longtime B&B watchers know Donna and Eric (John McCook) once had a controversial romance – at least within the Forrester clan. Although plenty of fans supported the duo, Eric’s family members felt like their age difference was too big of a hurdle. That led to loads of crazy sabotage antics.

Nevertheless, Eric and Donna ultimately tied the knot. It ended in divorce, but that doesn’t mean they can’t try again and have a lovely reunion. After all, Eric’s with someone in Donna’s age range right now. That’d no longer be an issue. Quinn (Rena Sofer), on the other hand, could stir up the storm of the century! You’d better believe she’d fight for her man.

Many B&B viewers miss Quinn’s dark side, so this might be the perfect time to bring it back. Quinn’s claws could come out as she goes to war with Donna. If Donna wins the battle for Eric’s heart, that would really drive Quinn over the edge.