The Bold and the Beautiful Spoilers: Week of April 16-20 – Stunning Moves, Huge Favors and Unraveling Mysteries 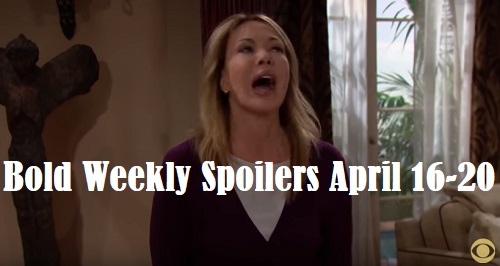 The Bold and the Beautiful (B&B) spoilers for the week of April 16-20 tease that even more shockers are ahead on the CBS soap. B&B fans know that Taylor (Hunter Tylo) just confessed to shooting Bill (Don Diamont) and raised a gun to do it again. Bill will fear for his life, but he’ll manage to escape unscathed this time.

Meanwhile, Liam (Scott Clifton) will debate his guilt with Steffy (Jacqueline MacInnes Wood). She’ll insist that they need to find the person who really fired that weapon. Steffy certainly doesn’t think it’s Liam, so she’ll want to pitch in any way she can. She’ll assure Liam of her love and point out that she desperately wants to put their family back together.

Over with Ridge (Thorsten Kaye) and Brooke (Katherine Kelly Lang), they’ll consider why Bill (Don Diamont) came clean to the cops. They won’t get why Bill would give up the power he had over Ridge, so they’ll give it some thought and work on a few theories. 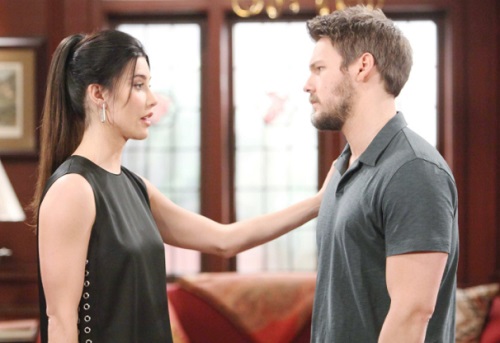 Once Steffy finishes her chat with Liam, she’ll stop by Bill’s place to ask him something important. The Bold and the Beautiful spoilers say Steffy will want Bill to surrender. She’ll maintain that Liam’s the only man she wants. Steffy will hope that Bill can respect that and move on, but we all know he can’t!

There’s a good chance Bill will ignore Taylor’s admission and let Liam think he really did this. Bill knows Liam’s freedom could be his bargaining chip if Steffy won’t cave in. It seems Bill will vow to back off, but more trouble’s brewing soon enough.

B&B fans will see Hope (Annika Noelle) make another passionate plea this week. She’ll sense that Liam is teetering on the edge of forgiveness, so she’ll voice her concerns. Hope will get a bit fed up with Liam during this conversation. She’ll contend that he can’t set himself up for more heartache like this.

However, it’s Liam’s life and he can do what he wants with it. He’ll tell Hope he needs space, so she’ll reluctantly give it. Hope will vent to Maya (Karla Mosley) this week, so at least she’ll have somebody to hear her out. The Bold and the Beautiful spoilers say Steffy and Liam will inch toward a reunion, but don’t expect it to stick anytime soon. Some twists will really change the game!

It sounds like an awesome week’s ahead on B&B. We’ll give you updates as other news comes in. Stay tuned to the CBS soap and don’t forget to check CDL often for the latest Bold and the Beautiful spoilers, updates and news