The Bold and the Beautiful Spoilers: Week of August 13-17 – Bittersweet Memories, Unpleasant Surprises and a Battle of the Exes

BY Heather Hughes on August 10, 2018 | Comments: one comment
Related : Soap Opera, Spoiler, Television, The Bold and the Beautiful 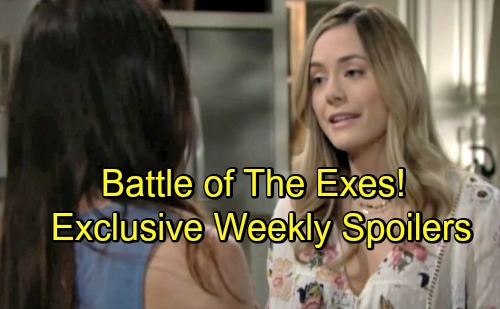 The Bold and the Beautiful (B&B) spoilers for the week of August 13-17 tease that we’ll see plenty of wedding-related drama. For starters, Ridge (Thorsten Kaye) and Brooke’s (Katherine Kelly Lang) truce will be tested. After agreeing to settle the conflict over their daughters, some news will put that agreement in jeopardy. Brooke and Ridge will have to fight their instincts if they want to stop the strife.

Elsewhere, Steffy (Jacqueline MacInnes Wood) and Liam (Scott Clifton) will get a bit nostalgic. They’ll reflect on the good times before trying to move forward. The Bold and the Beautiful spoilers say they’ll have to make some decisions regarding Kelly. Neither one of them wants a custody dispute, so Liam and Steffy should be able to settle that amicably.

Bill (Don Diamont) and Katie (Heather Tom), on the other hand, will face major issues. They’ll get into an argument over Will (Finnegan George), so expect some threats and insults. Meanwhile, Steffy will come up with a new business model at Forrester Creations. She’ll share her grand plans and put her team to work.

Back with Liam, he’ll assure Hope (Annika Noelle) that their future is solid. The Bold and the Beautiful spoilers say they’ll make love to celebrate, but Wyatt (Darin Brooks) will express his doubts later. He’ll want Liam to think long and hard before he rushes into another wedding, but his brother won’t waver from his goal.

When Steffy gets a wedding invitation, she’ll turn to Taylor (Hunter King) for support. Steffy will want her mom to be her plus one, so Taylor will quickly get on board. Brooke (Katherine Kelly Lang) won’t be pleased by Steffy’s guest of choice. She’ll set up a meeting in hopes of stopping any sneakiness, but it seems she can’t do much about this.

Brooke just won’t trust Taylor to attend without causing major drama. She’ll try to make Hope uninvite Steffy and Taylor, but her daughter will refuse. Hope won’t want to be rude, so Brooke will have to accept the situation.

Other B&B spoilers say Thorne (Ingo Rademacher) and Katie (Heather Tom) will have a romantic evening together. Unfortunately, Bill will manage to spoil it. He’ll barge in and spark a heated confrontation with Thorne, so Katie should get caught in the middle of the mayhem.