The Bold and the Beautiful Spoilers: Week of January 22 – Sally Digs For Dirt On Hope – Liam Feud Spirals Out of Control

BY Marcy Cohen on January 19, 2018 | Comments: one comment
Related : Soap Opera, Spoiler, Television, The Bold and the Beautiful 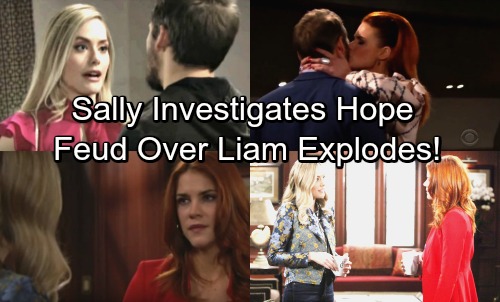 The Bold and the Beautiful (B&B) spoilers tease that Sally (Courtney Hope) will fume over Hope’s (Annika Noelle) presence in town. She’ll be irritated by the sudden threat to her chances with Liam (Scott Clifton). If Hope hadn’t shown back up, Sally might’ve had a clear path to Liam’s heart. Now she’ll have to worry about Hope winning Liam over.

Nevertheless, Sally won’t give up on her goal. She’ll think Liam is fair game now that his marriage to Steffy (Jacqueline MacInnes Wood) is over. Sally will plan on pursuing him and she won’t feel a bit bad about it. Since Hope could become serious competition, Sally will decide she needs to size her up. She’ll definitely be keeping an eye on Hope and her whereabouts.

The Bold and the Beautiful spoilers say Sally will unload her frustration on next week’s new B&B episodes, January 22-26. She’ll vent to Darlita (Danube Hermosillo) as she tries to figure out a solid plan. Fortunately, Darlita will be able to offer some help in that department. She’ll contend that a proper investigation is in order.

Sally will wonder what Darlita has in mind. She’ll be interested in anything that could help her keep Hope under control. B&B spoilers say Darlita will suggest some online research. She’ll think Sally should dig around and see what dirt she can discover. If nothing else, it’ll be a good way for Sally to see what she’s up against.

Sally will think that sounds like a decent idea. It couldn’t hurt to find out more about Hope’s past as well as her strengths and weaknesses. Sally might uncover something she can exploit. If she’s lucky, she might even find some blackmail material.

Of course, Hope has no intention of letting Sally push her around. If Sally tries to play that game, Hope could outmaneuver her. The Bold and the Beautiful spoilers say Hope and Sally’s rivalry will intensify in the weeks ahead. B&B fans won’t want to miss the exciting drama that comes from their feud.

It looks like some fun scenes are in store. We’ll give you updates as other news comes in. Stay tuned to the CBS soap and don’t forget to check CDL often for the latest Bold and the Beautiful spoilers, updates and news.