The Bold and the Beautiful Spoilers: Week of June 18 – Bill Blackmails Steffy – Sally and Wyatt Get Steamy – Maya Suspects a Spy

BY Marcy Cohen on June 15, 2018 | Comments: one comment
Related : Soap Opera, Spoiler, Television, The Bold and the Beautiful 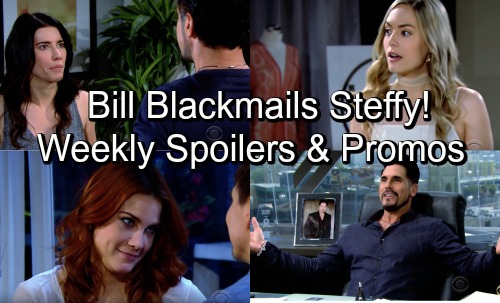 The Bold and the Beautiful (B&B) spoilers for the week of June 18-22 tease that several shockers are on the way. First, Liam (Scott Clifton) and Steffy’s (Jacqueline MacInnes Wood) blissful bubble will burst. They just got engaged again, but Bill (Don Diamont) will hope to derail the wedding. He’ll pay Steffy a visit and insist that she’s not going to marry his son.

Steffy will argue that she most certainly is. She’ll think Bill needs to accept that she loves Liam and wants to build a family with him. However, Bill will maintain that it’s not happening. He’ll let Steffy know that he intends to blackmail her. There’s a good chance Taylor’s (Hunter Tylor) actions will come back into play here.

Bill agreed to keep quiet about Taylor being the shooter, but B&B fans knew he’d go back on his word eventually. It seems likely that Bill will threaten to tell the cops and have Taylor thrown in prison. Steffy will be in shock over Bill’s latest scheme. She’ll snarl that he’s out of his mind, but he’ll just think he’s a man in love.

Bill will suggest that Steffy pushed him down this path. He wanted to do things the easy way, but he’ll feel like she forced him to play dirty. If Steffy won’t ditch her wedding plans and reunite with him, Bill could make her mother pay the price. Taylor’s fate may be in Steffy’s hands, so stay tuned for all the drama.

Other Bold and the Beautiful spoilers say Maya (Karla Mosley) will make a shocking discovery. It looks like she’ll catch Emma (Nia Sioux) on the phone with her uncle. Naturally, that’ll lead to some shockers. When Maya realizes Emma’s related to Justin (Aaron D. Spears), she’ll blow her top.

Maya will suspect that Emma’s a Spencer spy, so she’ll promptly fire the intern. It’ll be up to Justin to step in and fix this mess. Over with Sally (Courtney Hope), she’ll trade her gun for a different distraction. After a steamy kiss with Wyatt (Darin Brooks), they’ll start stripping down.

Will Wyatt and Sally have sex or stop themselves at the last second? These sad singles might as well let loose and have a little fun! We’ll give you updates as other Bold and the Beautiful news comes in. Stick with B&B and don’t forget to check CDL often for the latest Bold and the Beautiful spoilers, updates, and news.