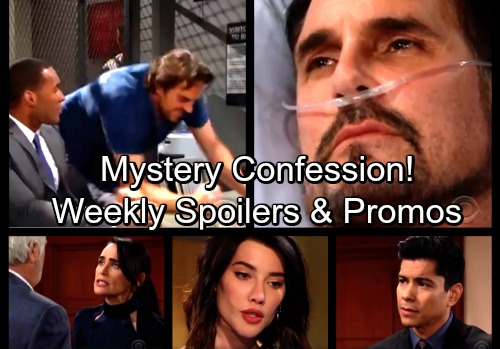 The Bold and the Beautiful (B&B) spoilers for the week of March 26-30 tease that we’ll see some frustration on the CBS soap. Ridge (Thorsten Kaye) has been arrested for Bill’s (Don Diamont) attempted murder, but there’s no real evidence against him. It’s true that Ridge had a fight with Bill before the shooting, but throwing punches isn’t the same as pulling the trigger.

Of course, it just wouldn’t be a soap without dumb cops! Despite the fact that Bill’s back was turned in the dark, Detective Sanchez (Jeremy Ray Valdez) is taking his word for it. However, plenty of people will try to change Sanchez’s mind next week. Brooke (Katherine Kelly Lang) will be particularly fierce as she fights to prove her husband’s innocence.

The Bold and the Beautiful spoilers say Carter (Lawrence Saint-Victor) will step up for Ridge as well. He’ll try to help Detective Sanchez see the light, but it’s not going to be easy. Unfortunately, Ridge will have to play the waiting game while everyone bickers and strategizes. He’ll wonder if he’s ever going to get out of this mess

Steffy (Jacqueline MacInnes Wood) will feel like she has to do something right now. She’ll confront Bill and push him to tell her the truth. Steffy won’t believe that Bill really knows who his shooter was. The Bold and the Beautiful spoilers state that she’ll eventually appeal to Liam (Scott Clifton). Steffy will urge Liam to talk to his dad and change his mind about identifying Ridge as the culprit.

As Ridge’s loved ones band together, they could make some progress. Bill might even be on the verge of altering his statement to the police. However, some stunning twists are ahead on B&B. The Bold and the Beautiful spoilers say a confession’s on the way and it’s sure to knock fans’ socks off.

Once Detective Sanchez starts grilling Quinn (Rena Sofer), it looks like Ridge will take the fall for her. He’ll be confident that she’s innocent of the crime, but he’ll think this is his chance to save her anyway. That news will certainly cause some confusion and loads of that frustration we mentioned!