The Bold and the Beautiful Spoilers: Week of March 5 – Bill Proposes Marriage to Steffy – Rages Over Her Rejection 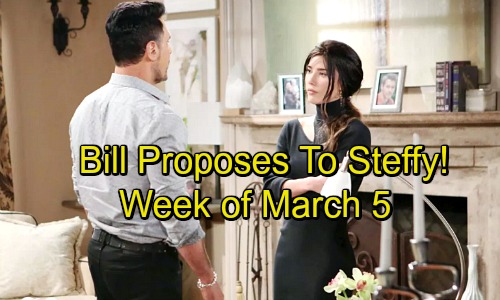 The Bold and the Beautiful (B&B) spoilers tease that Bill (Don Diamont) will be tired of putting his own dreams on hold. He’ll be ready to move forward with big plans and forget about the consequences. Bill just won’t care what anyone thinks anymore.

In his twisted mind, Bill believes he’s the one making all the sacrifices. He blew up his marriage to Katie (Heather Tom) and destroyed Liam’s (Scott Clifton) relationship with Steffy (Jacqueline MacInnes Wood), but he still feels like he’s the person who’s been wronged. Bill’s certainly got some nerve!

The Bold and the Beautiful spoilers say Bill will continue his rotten streak in the week ahead, March 5-9. He’ll kick things off with a daring decision. Bill won’t care about making Liam happy any longer. He’ll decide it’s time to seek a little happiness for himself.

When Bill shows up to see Steffy with an engagement ring, she’ll wonder if he’s gone nuts. Bill will insist that he’s merely crazy about Steffy. He’ll quickly get down on one knee and pour his heart out. Bill will argue that Steffy should stop waiting for Liam. He’ll think it’s clear that Liam doesn’t appreciate her like he does.

After Bill asks Steffy to marry him, she’ll immediately reject the offer. Steffy will want Bill to get something through his head. Their hookup was one of the worst mistakes of her life and she’ll always regret it. Steffy will contend that there’s absolutely no chance that she’ll ever tie the knot with Bill.

B&B fans can expect Bill to hit the roof. He’ll lose it when he realizes this truly isn’t going to happen for him. Bill will explode at Steffy and possibly hurl a few insults. He may think that if she can’t see what a great prize he is, then maybe she deserves a life of pining for Liam.

There’ll be plenty of tension between them once Bill stomps off. Of course, the situation should get worse once Ridge (Thorsten Kaye) is brought in the loop! This will send Bill’s life spiraling out of control, so stay tuned. We’ll give you updates as other Bold and the Beautiful news comes in. Stick with B&B and don’t forget to check CDL often for the latest Bold and the Beautiful spoilers, updates and news.