The Bold and the Beautiful Spoilers: Week of May 28 – Steffy Tumbles After Faceoff with Bill – Liam and Wyatt Unleash Fury

BY Heather Hughes on May 25, 2018 | Comments: 4 comments
Related : Soap Opera, Spoiler, Television, The Bold and the Beautiful 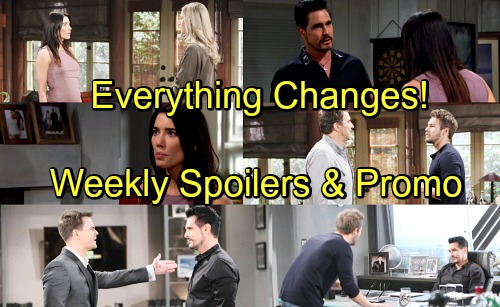 The Bold and the Beautiful (B&B) spoilers for the week of May 28-June 1 tease that Bill (Don Diamont) will pay the price for his deception. Over the next few episodes, his actions will bring the wrath of several characters. After Wyatt (Darin Brooks) convinces Liam (Scott Clifton) that Bill deceived him, the blabber will return to Spencer for a fierce fight.

Wyatt will insist that he just couldn’t stay silent any longer. He’ll argue that he never should’ve lied for Bill in the first place. Wyatt will hate the fact that Bill put him in this terrible situation. He’ll rant about all the stunts Bill has pulled and suggest that his dad is incapable of change.

Of course, Bill will fire back at Wyatt for spilling his secret. He’ll argue that his son should’ve kept his mouth shut. The Bold and the Beautiful spoilers say Bill will take back everything he ever offered Wyatt. He’ll basically disown him over this betrayal, but Wyatt just won’t care. After everything he’s had to put up with, Wyatt will think distancing himself from Bill is for the best.

Next, it’ll be Liam’s turn to unleash his fury. He’ll confront Bill about his twisted scheme and wonder how his own father could do such a thing. It was bad enough that Bill slept with Steffy (Jacqueline MacInnes Wood). Liam will think the fact that Bill broke a pregnant woman’s heart is downright despicable. He won’t appreciate Hope’s (Annika Noelle) latest round of sorrow either.

Liam will contend that Bill’s sick for treating his sons like pieces on a chessboard. However, he’ll take comfort in knowing that Bill won’t get what he wants. Liam will assure Bill that Steffy’s going to wash her hands of him. He’ll indicate that Bill’s delusional if he still thinks he’ll have a future with her.

Afterward, Bill will march over to Steffy’s house and attempt to explain. After a brief outburst, Steffy will slam the door in Bill’s face. Sadly, Steffy will slip and take a serious tumble. She’ll go into early labor, so she can add this to the list of things to hate Bill for. B&B fans won’t want to miss all the baby drama ahead!