The Bold and the Beautiful Spoilers: Wyatt and Sally’s Bond Deepens, Proposal Brewing – B&B’s Next Big Wedding Ahead?

BY Heather Hughes on December 5, 2018 | Comments: one comment
Related : Soap Opera, Spoiler, Television, The Bold and the Beautiful 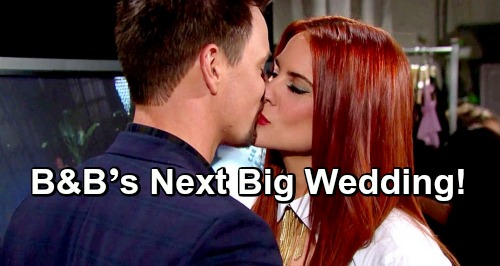 The Bold and the Beautiful (B&B) spoilers tease that Wyatt (Darin Brooks) will find himself falling harder and harder for Sally (Courtney Hope). He was quite smitten with her when she first came back to town and Sally quickly opened her heart as well. They walked into each other’s lives at the perfect moment, so it really set the stage for a solid romance.

Sally and Wyatt’s relationship has been developing off screen for the most part, but that’ll change during the week of December 10-14. The Bold and the Beautiful spoilers say this happy couple will get even happier. They’ll let themselves grow closer and accept just how right this feels. Wyatt and Sally feel like they’re a good match, so they’ll be eager to see where the future takes them.

B&B fans know Wyatt has been burned a few times when it comes to love. The same goes for Sally, so they’re undoubtedly proceeding with caution. These two are all in, but they’ve probably had a few lingering walls up. The Bold and the Beautiful may let those walls fall in the coming weeks. We’ll definitely see Sally and Wyatt develop a deeper bond as the holidays approach.

If Liam were in Wyatt’s position, he probably would’ve married and divorced Sally twice by now! Wyatt’s choosing to go slow – at least by B&B standards. He wants to make sure this lasts since he’s so crazy about Sally. However, most male characters just can’t go too long without proposing. Could Wyatt decide to pop the question soon?

Since things are going so well between Sally and Wyatt, it makes sense that they might be the show’s next engagement. Wyatt might even surprise Sally with a ring by Christmas! If not, Valentine’s Day will be just around the corner. Whatever the case, Wyatt and Sally will probably be changing their relationship status before long. They may end up with a wedding to plan this spring!

What do you think about Sally’s romance with Wyatt? Do you feel like they’re a nice fit for each other? Will Wyatt get down on one knee and propose soon enough? We’ll give you updates as other B&B news comes in. Stay tuned to the CBS soap and don’t forget to check CDL often for the latest Bold and the Beautiful spoilers, updates and news.