BY Marcy Cohen on October 23, 2018 | Comments: one comment
Related : Soap Opera, Spoiler, Television, The Bold and the Beautiful 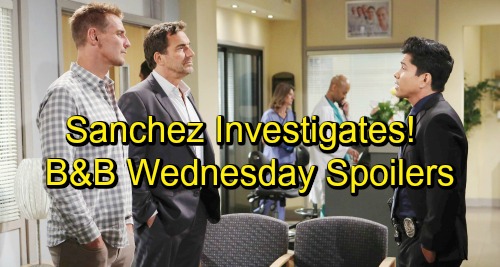 Brooke clearly isn’t happy about her husband charging at Bill and hurling him off the balcony. She shouted that if Will loses his father, it’ll be on Ridge. Brooke will stand by that statement on Wednesday. She’ll be appalled that Bill could die over a pointless confrontation.

After all, Brooke assured Ridge that he was the one she wanted. She just won’t understand why he had to start something. Katie will also blast Ridge and Thorne at the hospital. She’ll be terrified about the possibility of Bill not waking up. The worse Bill’s condition gets, the more outraged Katie and Brooke will become.

Later, B&B spoilers say Detective Sanchez (Jeremy Ray Valdez) will appear in the waiting area. He’ll make Ridge and Thorne sweat with a barrage of questions. Of course, the guys will claim it was an accident and nothing more. Until Bill wakes up and shares his side of the story, Detective Sanchez may not get the full picture.

On a light note, some special guests will arrive. The Bold and the Beautiful likes to bring in Big Brother contestants occasionally, so we’ll see two of them on Wednesday. Tyler Crispin will play a character with the same name. Brett Robinson will also be B&B’s version of Brett. They were featured on Big Brother’s 20th season, but now it’s time for their soap debuts!

Quinn (Rena Sofer) will get some presents from Brett and Tyler. They’ll stop by Forrester Creations to hand over their gifts, so expect some entertaining moments. Quinn should be caught off guard by what they hand over and why.