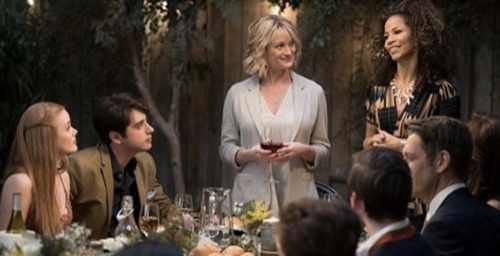 Tonight on Freeform their hit drama The Fosters returns with an all-new Tuesday, June 4, 2018, season 5 episode 20 series finale called, “Meet the Fosters Part 1,” and we have your weekly The Fosters recap below. On tonight’s episode as per the Freeform synopsis, “The Adams Fosters come together for some major celebrations, set one year after the spring finale.”

Stef and Lena brought the family together to celebrate all their accomplishment, as well as Brandon’s engagement to his girlfriend on tonight, ’s all-new episode of “The Fosters”. The parents were happy to show off their kids and they were truly proud of all that they each achieved however they couldn’t help pointing out all the things they found wrong with Brandon’s engagement. Their son had been with his girlfriend for two years and the parents had never met until Stef and Lena invited Eliza’s family to dinner. Neither of them had been comfortable about that and so they made these little remarks. They pointed out they had never met and that now they had to get to know each other in such a short time.

They laughed about how they will use the wedding as an opportunity for what should have happened years ago and so eventually the other couple tried to use the joint family dinner to get to know each other. The Hunters were paying for a destination wedding for the couple and so they mentioned what life would be like for the two afterward. Eliza’s parents were happy to bring up that their daughter received a job offer from the San Diego Philharmonic. They then asked Stef and Lena about Brandon’s prospects. Brandon was interested in a more modern tempo than Eliza and so Eliza’s parents didn’t think that could easily lead to a job. They thought Brandon should have chosen something different while he had the chance and so Brandon’s parents spoke up for him.

They said Brandon could easily do soundtracks to film, television, and even video games and said it was actually harder for Eliza when she went into classical music. Stef and Lena had tried to like the Hunters and it just wasn’t working. They were completely different and that could be said for the two families as a whole. Callie and Eliza’s brother Jamie were both lawyers and they couldn’t agree on anything. He was interested in corporate law and she was interested in nonprofit because she believed corporations were horrible places filled with horrible people. Callie also didn’t care for Eliza so much because she thought Brandon should have chosen someone more mature and so she talked about why she thought that way with Aaron.

Aaron had remained a firm family friend and he wanted to know what it was about Eliza that both Callie and as it turns out Mariana had found disagreeable, so the girls told him the bridesmaids’ dresses. They had wanted to be supportive and they found themselves with old maids’ dresses. There were long dresses with daisies on them and the girls had to wear with them with pearl necklaces. They couldn’t understand that or why they would have to wear high heels with frills on it and so Brandon revealed to them that Eliza hadn’t picked the dresses or the accessories. He told his sisters that her parents picked out everything because they were paying for everything and so Eliza hadn’t wanted to kick up a fuss.

Only Eliza allowed her parents to pretty much dictate everything. She told her parents she was staying with the sisters so that they didn’t know she was sleeping with Brandon and it seems the reason they were dressing her bridesmaids like little girls because they still thought of Eliza as one. So Callie and Mariana weren’t big fans of hers. They weren’t going to say anything to Brandon because they didn’t want to hurt him and so they were doing their best to hide what they were feelings yet there were a few things that Mariana wasn’t being quiet about. She told everyone what happened between her and Matt because they were now over for good. Marianna told her siblings at the table that Matt went on tour with his new band and returned just to give her crabs. And so Callie couldn’t help calling Mariana’s reveal classy because it was overheard by Jamie.

Jamie was giving off some vibes that he was interested in Callie. She noticed them and she later told Aaron that she wasn’t interested. She said she couldn’t get over the whole corporation law thing and Aaron advised her to still take him out for a ride. He said what happens at weddings stay at weddings and so he told Callie she should get laid except she still wasn’t sure about it by the time she heard about the family dance. Eliza’s family has this tradition where their family dance with a member of the opposite sex of the other family and that meant Jamie’s was going to be paired up with Callie for this dance. She heard it from Jamie and unfortunately hadn’t schooled her face in time. She wasn’t sure about dancing with him and had let it show.

Jamie had laughed off the clear rejection and tried talking Callie around when she had to step away to handle her brother. Jude had gotten drunk at the party because there were a few things he was keeping to himself. He thought Eliza’s other brother Carter was gay despite Carter having a girlfriend and he was also on academic probation. His GPA had fallen below 2.0 and so he was afraid of telling his parents that when they were so proud of him for going to UCLA. He eventually let on very drunkenly that he suspected Carter was gay and Callie had ignored it because she thought he was making much sense. And anyways she found out she had other things to worry about when she saw a pill bottle fall out of Jude’s things.

Back at the party, things got worse between the parents. Eliza’s parents were so traditional that became clear they hadn’t wanted to meet Brandon’s lesbian moms until they had to. The Hunters had had dinner with both Mike and Anna weeks ago and they told everyone how upset they wear to hear that the other parents couldn’t come to make it to the wedding because Anna was on bedrest. Then things just devolved from there. There thought becoming foster parents was like Eliza when she tried to adopt every stray animal she found and they also told Stef and Lena that they could give any warm story they had on Brandon to the Reverend. The reverend would marry the couple because the Hunters wanted the marriage to be “real”.

Brandon later apologized to his parents for that and they were understanding even if they hadn’t liked what the Hunters did. Except they were more concerned about Corey their foster son. They wanted to adopt him and couldn’t get into contact with his biological parents, so they were doing the best the could with what they had. They hadn’t told Corey what happened and had chosen to focus on the wedding. The same wedding that might not happen because the Hunters want Brandon to sign a prenup and Eliza also accidentally heard that Brandon used to be with Callie. Callie and Mariana were talking about relationships and how Mariana needed to stop acting like they were still in high school what with revealing she had crabs. And so Mariana said she was hurt because she thought she would get to marry her first love and had asked Callie about hers for Brandon.

Callie said she was over it, but now that its out there who knows what will happen next. It was bad enough that Jesus broke up with Emma at the party because Emma wanted to take a job in India and hadn’t been ready to settle down just yet with her longtime boyfriend.