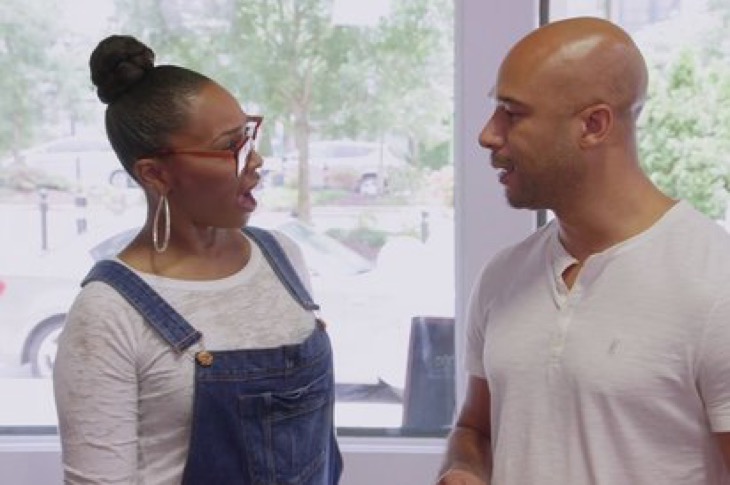 Tonight on Bravo The Real Housewives of Atlanta premieres with an all-new Sunday, January 14, season 10 episode 9 called, “The Peaches of Wrath,” and we have your The Real Housewives of Atlanta recap below. On tonight’s RHOA season 10 episode 7, as per the Bravo synopsis, “Things take an unexpected turn when Shereé invites Kim and NeNe to dinner; Porsha gets an opportunity that could take her career in a new direction; Shereé receives good news about her boyfriend; and NeNe gathers the ladies to address all the other elephants in the room”

Sheree, Kim, and Nene are hanging out and having lunch. Kim arrives first and tells Sheree “I bought a helmet in case you decided to snatch off wigs.” Sheree laughs. Kim then asks “How was San Francisco?” Sheree says “I’m mad because you didn’t go.” Kim says “I just couldn’t do it because of the mess with Kenya. I have never been around anyone like her.” They move on to talk about the other ladies and when Kim asks about Kandi and Porsha Sheree tells her “They have something going on.” Kim says “Yeah, the whole sex scandal thing.” Sheree agrees. Then Kim surprises Sheree and reveals that Todd and Kandi had a threesome and that Kandi wanted to involve her. Sheree is shocked to hear this.

Eventually, they move on to talk about Sheree’s love life. Kim tells her “You seem really happy and it’s about time.” Kim wonders where Nene is When they call Nene she asks them “You guys didn’t get the memo?” They ask “What memo?” Nene says “The memo that I’m not coming.” Nene says “Kim and I have too many elephants in the room for me to be dealing with her.”

When they get off the phone Sheree says “There is something wrong with her.” Kim asks “Does she seem a little off to you?” Kim also tells Sheree about a video that her daughter posted on SnapChat in NeNe’s bathroom where there were cockroaches running all over the floor.
Cynthia is hosting a back to school book drive. Kenya shows up and Cynthia is shocked to see her. The ladies ask her about Greg and she tells them “It’s not exclusive because I am not trying to be serious, but we are having fun.” While they are talking about him Greg shows up. He tells them that he is going to Brazil for a week. Porsha says “You know prostitution is legal in Brazil?” Greg says “I don’t know anything about that. I’m going for the Jesus juice.” All the ladies laugh. He turns to Cynthia and asks her to step outside for a minute.

Sheree’s son Kairo comes home to cook dinner for her. While he is making dinner her boyfriend calls and she steps outside to take the call. She sounds all happy and giddy. He tells her that someone withheld evidence that put him in prison. She tells him “It would be good if they could get things cleared up because I have been going through it with these girls. Nene keeps saying you’re a con artist.” Tyrone tells her “It’s not up to them. It’s you and me.” The phone call ends and Sheree goes back inside. Kairo has finished making dinner.

NeNe invites all the girls to her house to meet with an energy consultant to try and clean up all the toxic energy in the room. As the women arrive the consultant tells them “This is a no phone zone and so I would like for you to please give me your phones.” Some of the ladies are not exactly receptive to this, but everyone gives up their phones to find out what the gathering is all about.

Sheree, Porsha, and Kim are heading over to Nene’s elephant room event together. Kim asks Porsha how San Francisco was and Porsha tells her “Nene went off on me and it was a mess.” Kim then tells them about Nene not showing up to their dinner. When Sheree, Porsha, and Kim arrive Umbella tells them that it is a no cell phone zone. Kim tells her “I have six kids and a husband at home.” Umbella tells her “You have almost as many kids as I do, but this is a no cell phone zone. You’re husband and kids will be fine.” Eventually, the three ladies give up their phones. Nene and Kenya are not happy to see Kim at all.

As the medium begins speaking the lights begin to flicker. She tells them “I am here to address the elephants in the room. Everything I say will be with the utmost respect.” They start with Sheree. Sheree tells Kandi “When you get out of your head you are going to be able to help others.” Umbella moves on to Kenya and tells her “You are not a little girl and what people say about you doesn’t matter.” Umbella tells Cynthia “Usually your friend’s opinions are wrong, but they are right this time.” Cynthia is not hearing this, She doesn’t believe that Will is shady and she’s not hearing it. The medium moves on to Kenya. She tells her “You’re not going to be here much longer. You have a much higher destiny.”

The medium then wants them to switch seats. She asks Kim “Do I have your permission to clean you off and start over?” Kim tells her “No, I’m not feeling you right now.”

Cynthia decides to take over. She asks Kenya “How did you feel about what happened at the tea?” Kenya says “I don’t feel like anything was resolved.” NeNe gets upset. She says “Are we back on this again? I thought we were done. Besides Cynthia, you have your own elephants that you need to deal with.” Cynthia tells her “Elephants live long honey.” NeNe fires back and tells Cynthia “You and Porsha have your own elephant that you need to deal with.”

NeNe then lashes out at Sheree and the argument spirals out of control. Sheree tells them “This is my life and I can do what I want.” Kim makes a snide comment and Kenya says “What is the side conversation going on over here? It’s very rude.” Kim decides to pick up her cell phone and start texting. Kenya says “I’ll wait until you’re done texting if you want to have a conversation.” Kim says “No, I don’t but thank you very much.” All of the other ladies leave and it’s just Kim and NeNe left in the restaurant. Kim says “You said we had elephants in the room and I just want to know what they are. You don’t want to have dinner with me.” NeNe tells her “The elephant in the room is that we have known each other the longest and you aren’t supportive and you don’t have my back.” NeNe walks away leaving Kim frustrated.