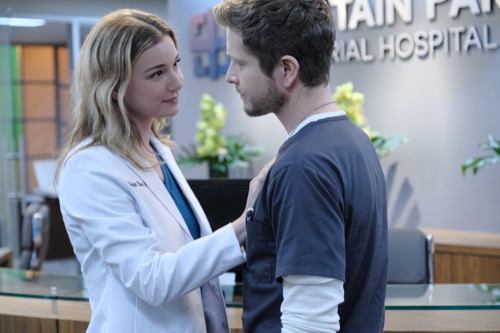 Tonight on FOX their new medical drama The Resident airs with an all-new Monday, October 01, 2018, episode and we have your The Resident recap below.  On tonight’s The Resident season 2 episode 1 premieres, “The Prince & The Pauper,”  as per the FOX synopsis, “Bell grows frustrated when Conrad’s dad, the new chairman of the board, requests Conrad’s input in his discussions about the hospital’s expenses.

As Conrad and Nic work to cut costs for their patients in need, Julian Lynn, a sharp and sophisticated medical device rep, meets the staff at Chastain and inserts herself into the ongoing work of the doctors to promote her costly products. Meanwhile, Mina’s relationship with Micah struggles in the wake of his healing process.”

The Resident season 2 episode 2 airs at 9 PM – 10 PM ET on FOX. Make sure to bookmark this spot and come back for our The Resident recap! While you wait for the recap make sure to check out all our television recaps, news, spoilers & more!

Mina takes Micah outside the hospital for fresh air. Pria and Devon take their dog for a walk while she talks about their wedding plans. Nic and Conrad cook dinner together outside. Meanwhile, Bell is alone at a bar having a drink. He tells a random woman next to him that he is sad about the love of his life who ended up being a psychopath doctor. He leaves the bar and spots a woman on the side of the street he likes. He lets her into his car. She looks like Lane. He offers her money but tells her not to talk. She is undercover. He gets arrested on the spot for solicitation of a prostitute. The next morning, his lawyer brings him clothes for court.

At a skate park, a bunch of kids dances and perform tricks on their boards and bikes. An accident happens. They call 911. Three helicopters come into the scene all from different facilities. They argue about whose zone it is. The young boy has severe abdominal trauma. The patient gets brought to Chastain. Meanwhile, Mina and Devon have fun scootering around the grounds of the hospital. Conrad is waiting. Devon gets to bring the medical students for a tour.

Conrad gets called in to see Bell and his father. Bell thinks it is inappropriate he wants his son there. Marshall wants to know from Conrad how the hospital can approve. Conrad and Bell argue about Bell’s salary, the safety of the patients and the expensive helicopter fees patients have to pay to have their life saved.

Jack from the skate park is brought in. AJ agrees to help in the OR. Meanwhile, Devon brings the students around to see patients. In the OR, they work to save Jack in surgery. A young diabetic girl wanders the hospital. She steals something out of a bench.

At a sponsored lunch by a pharmaceutical company, Devon meets a pretty representative. They talk and laugh about the inventions she has on display.

Conrad checks on Jack and meets his parents. They are thrilled he made it through. They lost his sister to cancer. Conrad notices something about Jack. He sends the parents to eat and checks Jack out who complains of back pain and weight loss prior to the accident. He palpates his kidneys and there is the pain.

Nic spots the diabetic girl nears some supplies. She grabs something and runs.

Devon gets the students to practice placing IVs. The rep comes by and sees some students having trouble. She offers a light to find the vein.

Conrad gets news that Jack has pancreatic cancer. They inform the family. Conrad thinks surgery will be a cure. Bell meets with Jack’s dad. He offers the use of their helicopter to get him to a hospital he prefers.

Mina and a nurse find the young girl who has been wandering around the hospital. She has collapsed. They call Nic in. They bring her to a room and check her glucose levels.

AJ meets with the pharma rep while Bell gets news that the undercover was wired when he was arrested.
Micah tries to push Mina away. He feels like a burden. She gets paged. Conrad gets news that Jack’s pancreatic cancer is localized but his spleen has bled on the pancreas. He needs surgery now. They take him in. AJ is performing.

The young diabetic girl goes on ventilation while one of the students looks for her parents.

Meanwhile, Jack’s surgery is stressful as they test each piece of the pancreas and it still comes up with cancer cells. He needs a Whipple procedure and Bell is the only one who knows how to do it. He scrubs in. They all look nervous. It is a success. Jack is a diabetic now. The pharma rep sells the family a $10k pump. Conrad grimaces.

Conrad’s dad looks in on the young diabetic girl who Nic tells him can’t afford the insulin. So the girl wasn’t taking full doses. Conrad, Mina, and Nic plead their case to Bell and Marshall. They think an outpatient community center for the uninsured might help. Bell and Marshall wants to see data first.

Mina says goodbye to Micah as he goes home. AJ watches them.

Bell gets a tough judge. He now has to self-report his incident to the state medical board. Bell is going to hide it. He rips up the paperwork.