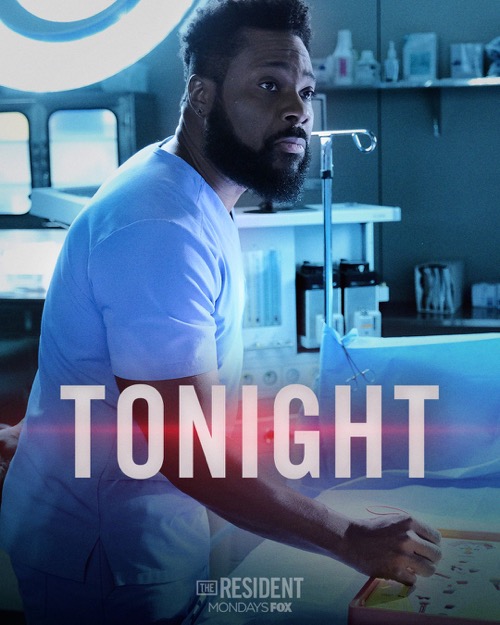 Tonight on FOX their new medical drama The Resident airs with an all-new Monday, November 05, 2018, episode and we have your The Resident recap below.  On tonight’s The Resident season 2 episode 7, “Trial & Error”  as per the FOX synopsis, “Patients from the hospital’s prescription drug trial start suffering life-threatening side effects, and Nic fears that her sister Jessie may be in danger. As a result, she and Conrad work to convince Bell that these trials are not worth the risk.

Meanwhile, Mina, Austin and Kit must set aside their competitive nature and work together on a patient whose health is quickly deteriorating and Devon uses Julian as the beta tester for a product he’s designed.”

The Resident season 2 episode 7 airs at 9 PM – 10 PM ET on FOX. Make sure to bookmark this spot and come back for our The Resident recap! While you wait for the recap make sure to check out all our television recaps, news, spoilers & more!

Tonight’s episode opens with Nic (Nicolette Nevin) and Okafor (Shaunette Renée Wilson) jogging in the park they stop to talk and Nic invites her to a girls night out of bowling.  Okafor is not too keen on it.  Nic’s phone rings it is Conrad she has to head back to the hospital it seems although her sister Jessie (Julianna Guill) is supposed to be in Savannah, Georgia she is not.

Nic gets to the hospital and finds Jessie in a room taking care of sick patients it seems Chastain now does drug trials with Conrad.  Jessie took part in the drug trial to make some money. It was a double blind test and some patience got the drugs and others got a placebo.

A Doctor walks in and asks what Conrad and Nic are doing there.  Jessie gets up to leave with her friend John and the doctor threatens him he will get not get his money.  John does not care he gets up and collapses.  Conrad calls for emergency care.

Devon is home with his fiance and he asks her to be his first trial for his new device and she says yes.  She has to talk to him and tells him she has been offered a spot at the San Francisco Chronicle and she has to move soon.  Devon is concerned, she tells him nothing is decided yet and not to worry.

Nic comes in and tells Dr. Bell she wants the drug trials, to STOP now!  Dr. Bell tells the Trial Doctor that members of the trial are severely ill.  The doctor tells Dr. Bell to get everyone to stand down or no money for Chastain.  Dr. Bell decides to let the trials go on.  Nic tells Dr. Bell a participant is her sister.

Dr. Austin is looking for a new intern.  Dr. Okafor needs a consult from Dr. Austin and Conrad.  They meet Dr. Okafor’s patient Ernie and it seems he is losing his vision.  They are told every day he loses something else.  Conrad decides to do more tests.  His wife is very depressed about the situation and says she cannot do it anymore, the work taking care of Ernie is just too much.

Dr, Okafor sends Ernie’s wife home to rest.  Dr. Austin asks what Conrad thinks is wrong with Ernie.  Conrad replies, “I think he is being poisoned!”

Irving is excited about Devon’s bachelor party and has made tee-shirts. Meanwhile, Devon has been practicing his dance.

John talks to Nic about how great his wife is and how she has been with him through his rehabs.  He did the drug trial to bring some money home.  All of a sudden Jesse bends over in pain and start vomiting.  She is scared.  John, meanwhile, cannot breathe.  Nic shouts to get Conrad to check the other participants.

The trial doctor is freaking and tells Conrad he is calling Dr. Bell.  Dr. Bell comes down and Devon fills him into what is happening.  Dr. Bell tells the doctor that the trial is over.  Dr. Bell demands all the data on the drug ASAP.

Conrad comes to see Dr. Austin the level of Cobalt in Ernie’s blood is 200 times higher than normal.  They find it is the hip replacement he got which is leaking poison into Ernie.

Ernie is going to need a new hip replacement which should fix most of his problems if he can survive the operation.

Devon talks to Okafor about his fiance wanted to go to San Francisco. Julia comes over to see Devon to see how her numbers are looking on his new device.

Dr. Bell has the results from the tests.  Conrad thinks it is a massive infection.  They decide to start a steroid treatment on John and Jessie and hope it will solve the problem.

Ernie’s wife has to give permission for him to get the bad hip removed and a new one put in.  His wife is upset because the operation could kill him, but then again it could make him better.  She tells them she cannot bear to lose him but she will sign the consent form if Okafor and Dr. Austin are in the operating room.

Jesse is having trouble breathing and it appears the steroids are not working.  Conrad tells her there are no guarantees.  Conrad tells Nic if she has something to say to Jesse now would be the time.  Nic tells Jesse to FIGHT and that she loves her.

Ernie’s operation is going on.  When they open up they find complications pieces of the device have broken off.

Devon’s device starts to go off and he fears she had a heart attack.  Devon runs to get her and finds out she had run out of the operating room because of a panic attack.  Julia thanks Devon and then they kiss.

Jesse is finally stable on the ventilator.  Conrad tells Nic to go to the lounge and rest.  She thanks him.  Conrad assures her she will get better.

Someone starts to code, it is John.  John who was only 30 years, he did not make it.

Dr. Bell tells the trial Doctor there will be an investigation and the Trial doctor could be facing manslaughter charges.  The doctor is shocked.  The trial Doctor wants the steroids to stop and he wants to up the antibiotics because he says they are treating septic.  Conrad wants the steroids to continue.  Conrad says John did not survive because he was the first person to get the drugs.  Dr. Bell agrees they should continue with steroids and he will deal with the trial Doctor.

Jesse wakes up Nic tells him John did not survive, she is devastated.

Back with Ernie, the operation is still having problems.

Devon comes over to speak to Julia she is upset she has done research and over 1 million people have medal on medal hips.  Devon tells Julia there are no excuses for his behavior.  Julia tells him they are both to blame and they should forget it.

Dr. Bell comes over to see Conrad and tells him it could have been worst.  Conrad replies, “not for John.”

Dr. Conrad tries to justify drug trials, Conrad is not accepting it.  Dr. Bell goes out to see John’s wife and tells her they were not able to save him.  John’s wife collapses in grief.  Dr. Bell looks upset.

Nic tells Jesse she has to start making better choices.  She tries to make Jesse understand she almost died today!  Jesse promises from this point on she will.

Dr. Austin grabs Dr. Okafor on the shoulder and he tells her she saved Ernie’s life.  Okafor goes to see Ernie and his wife and tells them that Ernie will get better.  His wife thanks her.

The show wraps up by Devon and Irving trying to get in on girls night.

Dr. Bell is at the bar with Dr. Voss and they both agree they like each other.

At the bar, Dr. Austin asks Okafor to come back to him.  She makes him tell her she is irreplaceable.  Okafor agrees to come back as long as she can work with Dr. Voss as well.

Devon gets up on stage and tells everyone he is going to show everyone his wedding dance with Julia and everyone should follow along.

After the dance, a slow song plays and they dance.  They both agree just for tonight.  Dr. Okafor watches them ….