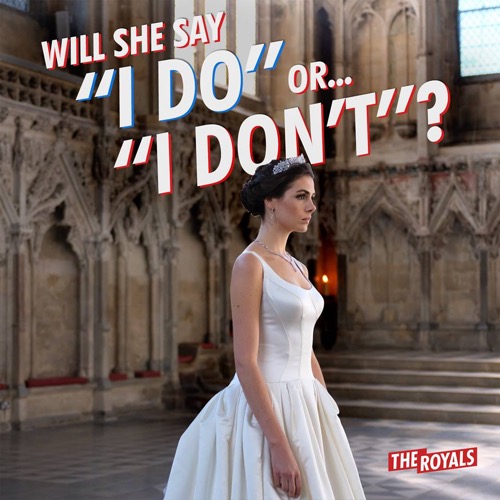 Tonight on E! The Royal’s airs with an all-new Sunday, May 6, 2017, Season 4 episode 10 and we have your The Royal’s recap below.  On tonight’s The Royals season 4 episode 10 called, “With Mirth in Funeral and With Dirge in Marriage,” as per the E! synopsis, “The rest of the family unites to combat a formidable foe.”

Tonight is going to be another crazy episode that you won’t want to miss, so be sure to tune in for our The Royals recap between 10 PM – 11 PM ET! While you wait for the recap make sure to check out all our The Royals news, recaps, spoilers, photos & more, right here!

Cyrus was the only one that was concerned on tonight’s all-new episode of “The Royals”. They were all planning on taking down Robert because they believed he was a tyrant and that Liam would be the better king though the others weren’t being as careful as they could be or as Cyrus has warned them to be. He thought they were all making careless mistakes. Cyrus thought Liam was too soft-hearted because Liam risked bringing him back to the palace and everyone knew how jealous he was of the king. He also warned his family of Eleanor. Eleanor had blabbed the truth to Willow and Willow was the only one that actually loved Robert. Cyrus thought Willow would betray them the first chance she could and so he told the rest of the family what Eleanor did.

Eleanor hadn’t regretted it. She said Willow needed to know and so Helena asked Liam for his own opinion. Liam and Willow used to be friends. Liam knew Willow better than the rest of the family and he said that they could trust her yet he thought it best if they still took precautions and Jasper said he could cover their tracks. He was the closest to the king and thought he could stop anything from reaching him. It turns out he had been wrong. Jasper later learned that Robert brought in additional security since someone tried to kill him and his fiancée was drugged in one of the State Rooms. And this extra security would be assisting with the regular team during the day while taking over fully at night.

Jasper realized his movements would be heavily curtailed by these new guys and so he informed everyone involved that they were going to need another way of protecting themselves. They thought maybe they could bring in James Hill and so they had Jasper talk to him, but James was out. He said his duty was to protect the king and that’s what he’s going to keep on doing. Jasper wasn’t sure if James was going to talk and so he took an additional approach. He went to Boone as in the man that everyone believed killed Robert and asked him if he wanted to do it again. He found out Boone had no problem with killing the king and so if anything didn’t work out as planned then they had a Plan B.

Jasper hadn’t told anyone the details about this other plan because he said it was best that they were kept in the dark and so everyone was supposed to carry on like normal. Eleanor continued to help decorate the church for the wedding and Helena had even gone on to meet Willow’s mother however that meeting had turned out disastrous. Willow’s family had known Dominque Stuart. She was the woman that was supposed to marry King Simon until someone drugged her horse and she was thrown from it thereby killing her. So the woman hated Helena and Helena eventually learned to hate her. She had done her best to stay away from the other woman and was going to keep on doing that until Willow approached Helena.

Willow had confronted Robert about causing the blackout and he hadn’t denied it. He instead claimed that he had to do it because he knew better than Parliament, the magistrates, and even the greatest minds in the world. He said that there were too many voices and that it had caused chaos. Robert believed now that there was just his voice that the world is better because stupid should never have gotten a voice in the first place, so Willow had thought of calling off the wedding. She told him that she needed time and he told her that he wanted to marry her because he loved her. Robert said he needed Willow and so Willow agreed that they should get married. And she later told Helena why she was going through with the wedding.

Willow wanted to expose Robert during her wedding vows. She said she could tell everyone while the world was watching that Robert had caused the blackout and the others figured that with so many cameras around that Robert might just go gracefully. If he doesn’t, Jasper will use his plan and so everyone hoped Robert would do what was right. Liam had even though he could talk sense to his brother and went to see him before the wedding. He told his brother that growing up there had been no one respected or admired more than Robert. Liam also said that there was a darkness to Robert unlike before and that maybe the reason their father wanted to disband the monarchy was that he hadn’t wanted Robert to become corrupted.

Robert had taken some time to think about those words and he imagined his father sitting down in front of him telling him that Liam had been right. The late King thought there was a darkness to Robert and had said that it was never too late for him to find the right path, so Robert talked to Willow after the imagined conversation. Whatever they said to each other had remained a mystery until the wedding went ahead. Jasper’s father Earl returned to hand him a much-needed gun during the blessing of the rings and so he felt more comfortable. The others had had to rely on luck and they didn’t have much of that. Kathryn was kidnapped during the ceremony, Cyrus’s ex-girlfriend Violet suddenly returned, and Willow went back on the word.

Willow said “I do” and became queen!