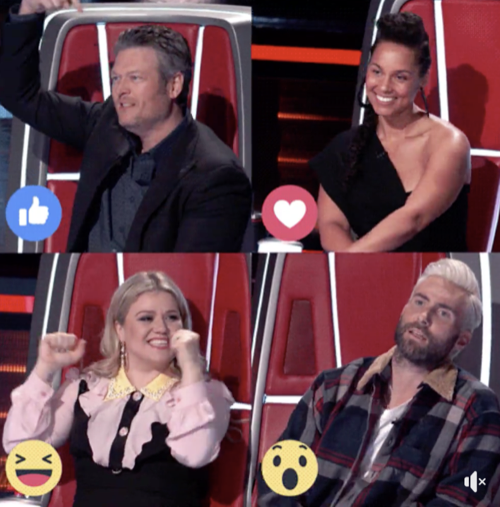 Kelly’s first pairing of the night is Brynn Cartelli vs. Jamella, she paired them because they are very different from each other and very unique. Cassidy Pope is the adviser, Brynn is singing, “Here comes goodbye,” by Rascal Flatts and Jamella is singing, “Girl Crush.”

Alicia: “Two beautiful performances, Jamella you really have a style about you, your flow, your vibe, I think it is really cool. Brynn you just continue to impress, you are only 14 and you have a maturity that is way beyond your years. Really beautiful job both of you.”

Adam: “Its so funny Brynn you know how good you were now, to be good at that age is remarkable. Jamella its a really tough one, I would have to go with Brynn because when she sings its kind of like game over for me. But you guys were both amazing, really good job.”

Blake: “Interesting song choices, Jamella you took that song and really put your spin on it which is very notable. Brynn the brovado of your voice is just one of my favorite things that I have heard this season, its awesome.”

Kelly: “Jamella you do bring more and more A game, you have an emotional connection that you cannot teach people when they are singing. Brynn I was so excited with you song choice. You both did a good job.” Kelly announces that Brynn is the winner of this knockout.

Blake’s pairing is next and it is Jaron Storm vs. Pryor Baird because they are solid performers and have amazing stage performance. Chloe Kohanski is the adviser, Jaron is singing, “Grenade,” by Bruno Mars and Pryor is singing, “Will It Go Around In Circles,” by Billy Preston.

Kelly: “Pryor I love your tone, I grew up listening to Janice Joplin and its just that rough tell a story you can’t hold back kind of tone. Jaron you kind of had this growl the whole time too, which was very fitting for the message, I dig you as well.”

Alicia: “Pryor I was just super impressed that your range was that diverse. Jaron you were maybe more interested in getting the crowd going but your energy was infectious and your tone was really special.”

Adam: “Jaron when someone comes up here and tries to do Bruno or even Adel there is a character attached to that and sometimes it is tough to get away from that. You are both talented, I think Pryor is just more ready, I would go with him.”

Blake: “Jarod you like to move around on stage but sometimes it seems like you are just trying to release some nervous energy, maybe you should try to get the movements out vocally. Pryor I noticed that it is hard for you not to start at the top of your range and this song, you dialed back and it really paid off.” Blake announces that Pryor is the winner of this knockout.

Alicia’s pairing is next, it is Christiana Danielle vs. Terrence Cunninham and Chris Blue is advising. Christiana is singing, “Elastic Heart,” by Sia and Terrence is singing, “Tell Me Something Good,” by Chaka Khan.

Adam: “So much to talk about, holy crap, Christiana you are great but I think there is more and you will find your way and be one of the best. Terrance I cannot even believe what was going on with that register, those high notes, you were so off the charts. This decision is terrible and I’m super pumped that I don’t have to make it.”

Kelly: “Terrance I had total church giggles, I couldn’t even breath, it was the perfect song, it was perfect where you took it and it moved me, it was good. Christiana you are insane, I remember in the blinds I had no chance but i turned my chair, the intensity in your eyes is so captivating. I think you are both equally talented.”

Blake: “Christiana I am a fan of yours, I will say I feel like it was like a challenge for you in the big verse. Terrence put together a performance with all the stuff, you are pretty good.”

Alicia: “Christiana, you are so special, when you first shared with me why you chose this song, you also shared with me that before this show you only sang worship songs which is pretty shocking to me I wouldn’t have thought that. Terrence you did the original Chaka Khan version.”