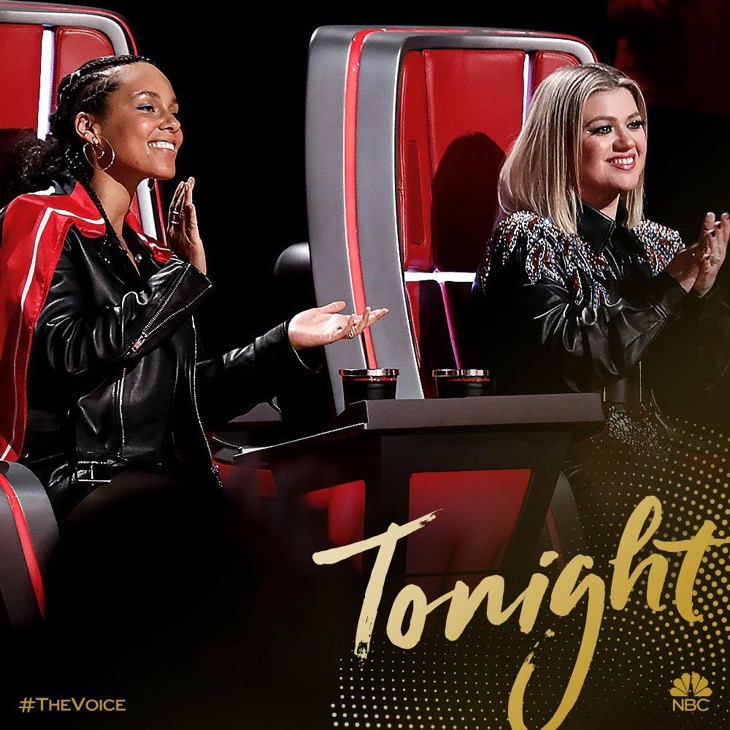 Tonight on NBC’s Emmy Award-winning musical competition The Voice airs with an all-new Monday, May 14, 2018, season 14 episode 254 and we have your The Voice recap right below.  On tonight’s The Voice season 14 episode 25, called, “Live Semi-Final Performances,” as per the NBC synopsis, “The semi-finalists perform with hopes of getting into the Finale.”

Voting was open as the TOP 8 performed gave it their all to their performances on tonight’s all-new episode of “The Voice”.

The contestants were usually solo artists. They figured out how they wanted to do the song and sometimes chose the song themselves because of their connection to it however that all changed tonight when they’re platform changed. They each had to share that stage with someone else and so it didn’t matter that they were also going to be giving a solo performance as well. Everyone knew that they had to carry the night flawlessly and that couldn’t happen when they had to sing with someone else. There was always going to be that one person one-upping the other and so this platform worked back during knockouts. Back then, they could out-sing the other because they were trying to impress the judges and unfortunately that was no longer an option.

The die-hard fans were going to vote for who they would have no matter what, but each contestant had to give a great duet or they risked going home because of the new fans. Those same new fans that were left over after their favorite was eliminated and so one would think the first duet would be one no one had seen before. Except someone thought it was wise to pair up Pryor and Kaleb again. The two had sung a duet back when they were on Team Blake’s team and Pryor had won that round overwhelmingly. His voice added a rock element to any country song his coach or anyone else put in front of him and it did that again when he performed “Hillbilly Deluxe” with Kaleb. Kaleb was a true country star in his own right and still the voice that could be heard the most was Pryor’s.

That’s what people will remember about that duet while all anyone would remember about the first solo was that it had been Brynn. Brynn performed “What the World Needs Now” by Jackie DeShannon and what many of the judges noted about it had been how they always feel pulled in by her voice. She’s been told before that she could keep the focus entirely on her and that’s what she did with her solo. Now, the next solo of the night had gone to Jackie. She was a classic rocker and she wanted to bring that back, so she chose to perform “Here I Go Again” by Whitesnake. There had actually been a former member of the group working on the show and so Jackie was able to get a tutor on this one.

Jackie may have missed her graduation because of the show thought it turns out there was still a lot to learn and she picked up a few things. She learned where to take the lyrics slow and the times she had to give it her all. Jackie had chosen this song because Adam had advised her last week to have fun onstage and she ended up doing just that tonight. She went full-on rocker and had even brought in a smoke machine. It had been lively as well as fun! Jackie also thanked Adam afterward for his advice and thanked him because he heaped praise on her like never before. He loved her solo performance and Alicia couldn’t help telling Jackie “see, how he validates what we already knew”. Still, the next act of the night had been a duet.

Kyla and Spensha took the next duet and they decided to do things a little differently. They hadn’t wanted to sing the same song because they thought they would have a bigger impact on a mashup. Kyla performed “What’s Going On” and Spensha performed “Rise Up. They singing different songs meant their voices were each going to have their moment and make time for the other. It had been the perfect mashup and it had also gotten the audience to give them a standing ovation before they were truly finished with a song. So again, perfect! They would have been a hard act to follow and surprisingly the next person that hit that stage came close to inspiring the crowd. The next act had been Rayshunn.

Raynshunn was a crowd favorite. No one did soul like he did and tonight he performed John Lennon’s “Imagine” which had a lot of memories for everyone. It was quite a popular song and everyone seemed to love Rayshunn’s version of it because it was hard not to love anything Rayshunn did. He brought such a joy to his music that the judges kept help remarking on it. They all say that he made everything lighter and brighter. And so it hadn’t shocked anyone when they gave him a standing ovation because this was the Rayshunn they all know as well as love. The next act of the night had been Spensha. She had her solo then and performed “My Church” by Maren Morris. Morris had recently sung this song onstage and Spensha admitted to Blake that she had loved watching it.

Spensha’s said the song reminded her of her parents’ first meeting and so she had been glad when Blake chose it for her. Blake always tells her knew he knew what he was doing because he was the only one with a full set in the semi-finals and picking that song had helped Spensha. She gave a powerhouse performance that was unique and it showed she was great with either a solo or a duet. Afterward, Blake likes to tell his artists what they could have done differently and he hadn’t any of those critiques for Spensha because he believed she was safe from elimination thanks to her performances tonight. The next solo act had also been someone from Blake’s team and so he got to be proud when Kyla chose “Let it Be” by the Beatles.

Kyla grew up in the church and she wanted to back to her roots for her solo. Out of all the contestants she was the one he was most proud of and he was proud that she had more hits on iTunes than he did. Blake believed Kyla could go on to win the entire competition and he reiterated that after her performance. She had wowed everyone with her soulful voice and the other judges had been wowed. They loved Kyla and so she must have sealed in her position in the next part of the competition. And the next person that hit that stage had been another duet. It had been Brynn and Britton who decided to perform a mashup though their mashup was a little different than Kyla and Spensha.

Britton and Brynn both sang the mashup of “You Can’t Always Get What You Want” and “Four Five Seconds”. They had great chemistry because they view each other as siblings and so they brought that easy-going personality with them. They played off each other and while they were both singing the same parts – they hadn’t overwhelmed the other. They were both great and so neither of them needed to worry about the duet being held against them. Now, the guy that followed the babies of the competition had been Kaleb. Kaleb performed “It Is Well with My Soul” by Audrey Assad and it turns out that’s a song he’s been wanting to sing since day one. He usually had a little bit of country and a little bit of rock ‘n roll, however, a slower song was a first for him.

It was nice for a change and it had made his coach tear up. Kelly loved him and asked the audience each week to remember to vote for him. The next act that followed Kaleb had been a duet. It had been Jackie and Rayshunn and they decided to do a mashup unlike any of the others. They chose “Believer” and “Radioactive” from Imagine Dragons and took turns at being the lead rocker. It was a great match for Jackie and it had been something different from Rayshunn, so it had been an upbeat performance. In fact, all of the performances tonight had been top-notch and that tradition continued on with both Pryor and Britton. The first act had been Pryor and he performed “Change the World” by Eric Clapton.

That had been a first for Pryor because the song had been a slow one and Pryor turned it into his own love song to his girlfriend. The two met when a tree fell on her house and so Pryor never hid the fact that he had always been grateful to that tree. So what they had was sweet and Pryor’s raspy voice made his love song sound almost as if he was begging to make the world better for her. The judges had truly enjoyed that aspect to his performance and later on they enjoyed a first for Britton. Britton had been wanting to sing Bruce Springsteen since the beginning and tonight he finally got the chance. He performed “The Rising” and had had everyone on their feet dancing to the music because it was hard not to react to either Britton or Bruce.

And so the song had been perfect for the young artist.