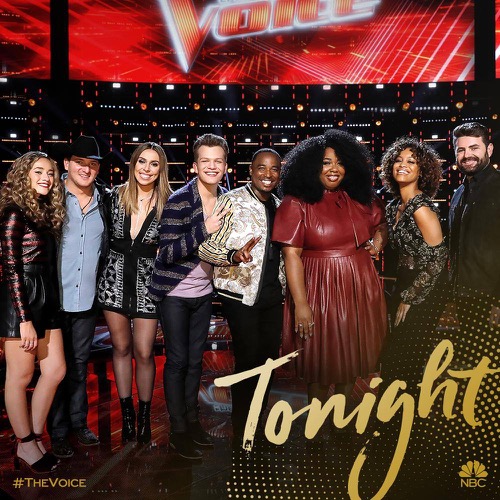 Tonight on NBC’s Emmy Award-winning musical competition The Voice airs with an all-new Monday, May 15, 2018, season 14 episode 26 and we have your The Voice recap right below.  On tonight’s The Voice season 14 episode 26, called, “Live Semi-Final Results,” as per the NBC synopsis, “Three artists will be revealed as safe by America’s votes. After these finalists are revealed, the bottom two artists will be sent home immediately, while the middle three artists will compete in the Instant Save for the last spot in the finale.”

Tonight the four finalists will be revealed. The coaches take their chairs. Kane Brown and Panic at the Disco will perform as well as Blake. The Top 8 take the stage. Rayshun tells the audience that he is so happy to be here in this moment at this time. For Brynn, being on The Voice has been great because of the people she has met. Carson announces that he will begin announcing the finalists tonight in no particular order – Spensha Baker is headed to the finals.

Kane Brown takes the stage to perform his single Heaven. The remaining 7 take the stage waiting to hear their fate take the stage. Carson announces that Brynn has made it to the finals.

Panic at the Disco takes the stage to perform. Carson reveals the name of the 3rdfinalist – Kyla Jade. She shakes her head in disbelief.

Before we get to more results, Blake takes the stage to perform. The 5 remaining artists take the stage. Carson announces the 3 that will have to perform to be saved. Two of the artists will go home. Britton, Kaleb, and Pryor must be ready to perform. Jackie and Rayshun are headed home.

Pryor takes the stage first from Team Blake to try and win a save. Blake stands after his performance and tells America that he deserves to be in the finale. The crowd goes wild.

Kaleb from team Kelly takes the stage to sing Simple Man to win the votes to make it to the finale. Next up is Team Alicia’s Britton. After his performance, Alicia stands to tell him he just gave her the full body chills. Adam rallies behind him too.

The votes for Instant Save open up via twitter. All of the coaches wish their team members luck before the results are read. The window closes for the instant save. The one performer that will go to the finale is – Britton. Kaleb and Pryor are headed home.