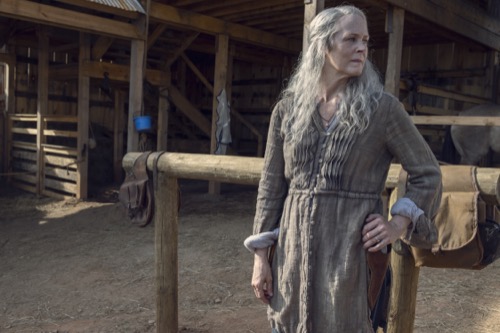 Tonight on AMC our favorite show The Walking Dead airs on an all-new Sunday, November 25, 2018, fall finale episode and we have your The Walking Dead recap below. On tonight’s The Walking Dead Season 9 episode 8 called, “Evolutions,” as per the AMC synopsis, “A small rescue mission braves a dangerous herd in their hunt for a missing comrade, only to discover a surprising threat that could doom them all.”

While out looking to rescue Eugene, Aaron, Jesus, and Daryl watch walkers mill around in a field. They are acting funny. The wind picks up. There is a storm coming. They leave.

Gabriel is working with Negan on meditation. Negan loses his concentration. He appreciates that he is trying to help but he is never getting out of here. Besides he is entertained by the little windows in his cell where he hears it all. Gabriel leaves and gets word that Rosita was hurt but has been found.

Michonne, Siddiq and the others arrive at Hill Top. At the wall, they state their business and dump their weapons on the ground. They enter through the gates. Michonne and the group are greeted coldly by Tara who updates them on Rosita and Eugene as well as where Jesus and Aaron are. She offers to stay the night and tells the new group they will have to wait until Jesus comes back so he can meet them. If they want to stay they need to earn their keep.

Michonne sees Carol. It is uncomfortable between the two of them while they talk about the kids. Carol brings up the fair. Michonne turns her down and tells her they each have to take care of their own.

In the field, Daryl tells Aaron and Jesus the wind is carrying their sound to the walkers. They are coming for them. They need to move.

Gabriel is changing Negan’s bedpan. Negan taunts him. Gabriel tells him to shut up. Negan stops and asks him what is wrong. Its Rosita, she is hurt and he is stuck here caring for him. Negan apologizes.

Henry meets kids his age; Addy, Gage, and Rodney. They have been watching him and he seems sad. He tells them he is just trying to adjust. They ask him if he wants to hang out with them in the woods tonight. They sneak out. He is surprised but agrees to go.

Michonne and Siddiq talk over Rosita in bed in the infirmary. Michonne admits it was hard for her to come here. He tells her it isn’t too late to mend fences. She agrees but she isn’t going to apologize the way they want her too for saving their lives. Rosita comes to. She needs to find Eugene. They tell her Aaron and the others are already looking. She whips out of bed. They have no idea what they are dealing with, she tells them in a panic.

Its night, Daryl, Aaron, and Jesus find a barn. Daryl’s dog tracks a scent. It’s Eugene. They find him hiding out. He dislocated his knee and he is hysterical. He tells them about the herd of walkers that have come by here twice. They whisper to each other and they are out for him. He knows it sounds crazy but he is telling the truth. The dog barks. The walkers are coming.

Henry hangs out with the new kids. They get bored after some drinking and decide to show him the hole they dug months back that has a walker in it. They tease and taunt the walker. Henry gets mad and jumps in the hole to kill it. They all leave as he sits in the hole.

On the road, Eugene explains his theory that the walkers must be evolving if they can whisper. It’s not so hard to believe if you think about the fact that their brain might be degraded, but it is the only way to kill them.

Negan realizes his cell door is open. Gabriel must have failed to lock it when he was upset. Negan gets a sinister look in his eyes and leaves.

Henry is brought to Hill Top’s jail after being discovered drunk outside the gates.

Daryl sets off firecrackers to attract the walker herd, but he doesn’t work. He watches as they continue to move in the direction of Aaron and the others. Meanwhile, Aaron and Jesus cannot get Eugene over a gate to escape the herd. They fight off a round of walkers. Michonne shows up and the newcomers who want to earn their keep. They get the gate open. Just as they are all about to escape, Jesus hangs back a second to kill a walker who speaks to him. He stabs Jesus who falls to the ground dead. Daryl kills the walker. They all cry and run to Jesus. Daryl looks at the walker who killed him. Its a mask with a human underneath.