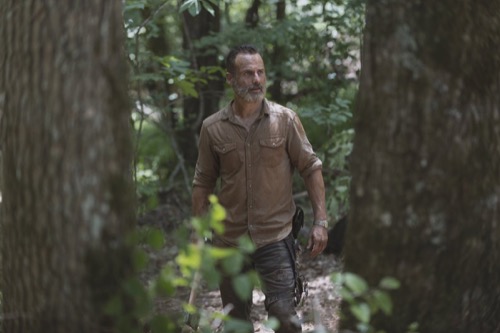 Tonight on AMC our favorite show The Walking Dead airs on an all-new Sunday, October 28, 2018, premiere episode and we have your The Walking Dead recap below.  On tonight’s The Walking Dead Season 9 episode 4 called, “The Obliged,” as per the AMC synopsis, “Rick’s vision of a civilized future is threatened by a sudden reckoning with past sins that remain unavenged and unforgiven.”

Michonne is restless as she works and spends time with her family all day. At night she has been getting out of bed to kill walkers. One night in the rain she comes across a walker who is hanging with a noose around his neck from a tree in the woods. Looking up at him, she grows teary eyed and upset. Another walker on the ground comes at her. She loses her sword but reaches from something in a pile behind her. She grabs and swings. When she gets a good look at it she discovers it is a bat. She is disgusted. She drops it and leaves.

Maggie takes a crow bar and packs it in her bag. She tells Jesus she is going to make things right like they talked about with Negan. He wants her to be sure. She tells him she is and leaves on horseback.

Rick and Eugene assess the bridge. Eugene thinks the bridge is going to break again with the pressure of the water and the rain. Eugene wishes he could have done more.

Rick checks in with Carol. She is taking her people home to the Kingdom. Rick pleads with her not to go. She tells him she is going and the saviors will figure out what they want to be. Rick doesn’t think they are doing the right thing. Carol tells him she is still trying to figure things out like everyone else. She wanted it all to work. Gerry comes by and tells Rick that Maggie is headed to Alexandria. Rick radios to the others to be aware Maggie is coming and to hold her up at the gate. Daryl offers to take Rick there on his bike.

Michonne gets word that Negan isn’t eating. She tells Nota she will handle it. Daryl takes a wrong turn on purpose. Rick demands he stop. They get off the bike and fight, rolling into a large ditch.

Negan taunts Michonne. She shouldn’t be kissing booboos and harvesting crops. She is a warrior. He tells her about his wife. She died of cancer. They talk about Carl. He asks her about her own child. She tells him he didn’t make it. He is glad his wife died. She was too weak to make it here in this world. He knows she feels the same because her son would have made her weak too.  She gets up and leaves.

Anne has Gabriel tied up and laying on the ground. She has a walker at the ready. He pleads with her. She needs to do this. She lowers the walker. He tells her he forgives her for whatever she has to do. She pulls the walker back and then puts a rag over his face. He passes out.

Carol and her people are packing up when Jed and his people arrive. Jed has a gun. He threatens Carol. She warns him. He doesn’t budge. She lowers her gun and he takes her keys. She kicks his leg out as he turns. They all get into a fight. Daryl and Rick hear shots fired. They try to get out of the hole.

Michonne gets upset thinking about Negan and what he said. She heads back to see him and gives him a piece of her mind. After she is done, she tells him to eat. Before she goes he asks her about his bat. She tells him she doesn’t have it. It is out there somewhere. He becomes angry.

Walkers start to slide down into the pit. Rick holds on to the side of the rope that is dangling while Daryl kills them. Daryl starts to climb. Rick makes it up and to the top. He leans down and helps Daryl up. They make it out. Rick wants to stay and lead the walkers away from the camp. Daryl thinks he is crazy but tells him to be safe as he leaves on his bike.

Gabriel comes to in a metal storage unit. He comes out and calls for Anne. He finds a note in his pocket. She is gone.

Michonne reads to Judith on the porch. Meanwhile, Rick leads the walkers away but comes upon another herd of them. The horse throws him off. He falls on a piece of stone and is impaled by a piece of threaded rod through his left side. He screams for help before passing out.