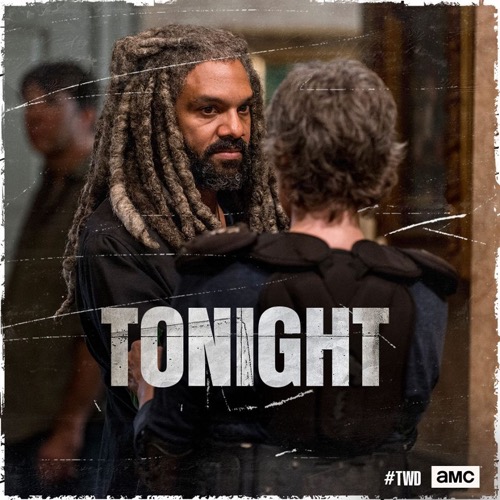 Tonight on AMC our favorite show The Walking Dead airs on an all-new Sunday,  March 25, 2018, episode and we have your The Walking Dead recap below.  On tonight’s The Walking Dead Season 8 episode 13 called, “Do Not Send Us Astray,” as per the AMC synopsis, “Trouble arises at the Hilltop when unexpected visitors arrive and the community is thrust into action; heartbreaking discoveries are made.”

Morgan is out in the woods. He sees the ghost of Gavin who keeps telling him he was “suppose to.” Morgan yells “no” at him. He heads to the truck a few feet away and honks the horn to alert Carol and the others.

Siddiq is in the medical room arguing with the doctor that he knows a lot more about medicine than she thinks. Meanwhile, Maggie is in the dark. She tells everyone to get ready.

Maggie radios. She wants to talk to Negan. Simon answers and tells her she is speaking to Negan. She and her people are going to have to pay. She threatens the lives of the Saviors she has been holding hostage. Simon doesn’t care. Simon commands his people to do away with Hilltop. Dwight warns Simon that this could be bad. Negan won’t be happy. Daryl comes out of nowhere on his bike and starts shooting. Simon jumps in and drives. They pull a bus in the way. Shooting erupts right in front of the house in Hilltop. Simon and the others throw explosives. Daryl and Michonne shoot up their vehicles. It’s dark. Everyone goes quiet. Simon doesn’t understand what happened. Maybe they ran? He whistles. The Saviors move closer. Out of nowhere, the Hilltop house lights up and the team fires round after round at Simon and the others. Some of Rick and the team are on the ground. They start shooting. Simon and the survivors get in their car and flee.

The next morning, Tara tells blames herself for Dwight being back with the Saviors. Daryl disagrees with her. It is who he is. She can’t help but be thankful he saved her life. Daryl reminds her that Dwight just tried to kill them last night.

Rick works to take boards off a window. Michonne tells him she wants to look at his cut. He tells her after he finishes with the window. He explains to her why he went after Negan. Outside, Maggie watches as some of the team bury the dead.

Siddiq sees Rick sitting on the porch. He tells him he needs to treat his wounds or they will get infected. Siddiq starts talking about the dead. Rick tells him “don’t.” He gets up and leaves. Night comes, Maggie leans over the landing and looks down on her people all sleeping on the floor. Meanwhile, in the Hilltop hospital, one of their own has died and come back to life as a zombie. He attacks the others in the room. They make their way into the Hilltop house.

Henry makes his way out in the dark to the Saviors being held hostage at Hilltop. He nudges Gregory awake with a gun. They talk. He wants to know who killed his brother. They hear screams in the distance. In the house, walkers attack. Rick, Ezekiel, and Michonne try to get it under control. Back outside a walker gets in the pen. The prisoners flee. Henry is left laying on the ground.

Bruce makes it upstairs. Carol sees him. She is forced to take him down. Inside, Rick, Maggie, Carol, Daryl and the others come to realize that the Saviors did something to their weapons. Outside, Maggie comes across some of the Saviors. She is surprised to hear that they decided not to run.

The next morning, Carol and the others look for Henry. Morgan can’t stop seeing the ghost of Gavin who keeps talking to him. Maggie, Rick and the others watch as they bury more of their own.