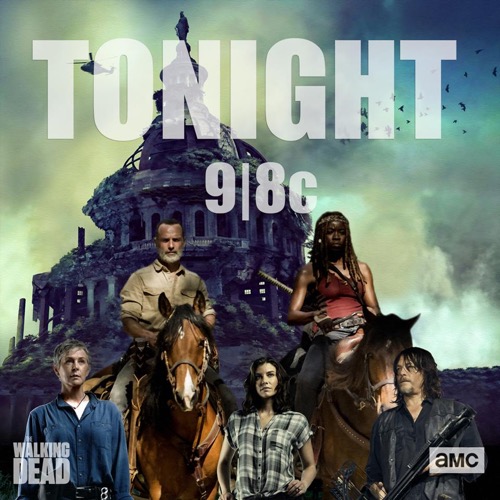 Tonight on AMC in anticipation of the season 8 premiere an all-new Sunday, August 5, 2018,  The Walking Dead: Season 9 preview we have your The Walking Dead Preview Special recap below for you!  On tonight’s episode, as per the AMC synopsis, “Khary Payton, Tom Payne and Angela Kang discuss the upcoming ninth season of “The Walking Dead.” Hosted by Yvette Nicole Brown.”

The Walking Dead Season Nine Preview Special started with Yvette Nicole Brown asking the audience to send in their questions. Tom Payne, Khary Payton and Angela Kang joined Yvette. Yvette asked Angela what she has planned for season nine. Angela is so excited for the new season and says the season starts with a time jump. The season won’t follow the comic exactly but Angela offers a preview of the new season and says it will be a new chapter in the series.

Viewers will see what the future will hold with everyone trying to rebuild a whole new world. Tom is excited to go from all-out war to rebuilding. The season picks up a year and a half in the future and Hilltop will be doing really well because they are ahead of the game with all of their farming experience. It will be a whole new system of bartering.

Khary says his character will still be a king. But has become more at home with being a king and won’t be so over the top with it. Angela says that she will work hard to write Rick out of the series with respect for all of his hard work and his history with the show. Lauren tells the audience that what they will enjoy most about this season is all that is happening. There will be tons of change that is exciting. Katelyn is excited for the fans to see the group in a new way. The heroes will change and come into their own. Their whole world has evolved and everyone has to adapt. It is the same show but also very different.

Tom says they have a new amazing team that has trained the whole cast on how to ride horses. They have all really excelled in their riding skills. Andrew reports that his horse had a very bad habit of rearing up onto his back two legs. Tom and Khary think they both were comparable in their horse riding skills but both didn’t want the directors to know how well they could ride because then they would be given the most difficult horse.

Angela shares that there will be romance for Khary and Carol this season. Carol and Darrel will also share some special times as well. Tom says it is hard for Jesus to get close to people because he can’t risk giving a part of himself away. He did a little bit with Maggie but it was hard for him. Khary is excited about the future romance with Carol. She has helped him grow as an actor.

Lauren talks about Maggie’s baby and that her concern is making a better world for the baby. She is focused is in his best interested. Tom says it has been very interesting working on the set with a baby. The set is usually really crazy but when the baby is on the set it is very quiet and he has really enjoyed it. Angela says the tension between Maggie and Rick grows due to Rick’s decision to spare Egan. They love and respect each other but there will be tension.

Michonne and Rick will be in a good place this season. Michonne will be deeply affected by losing Rick. Andrew talks about his new haircut and when he was told it made him look sexy he didn’t like that. He is an apocalyptic warrior, not a sex symbol.

Norman talks about Daryl’s maturity and how his relationships have changed with the group. He has a harsher voice but it is full of love. Daryl will be at the sanctuary at the beginning of the season and go from there. Khary reports he is thrilled that his character has connected with the audience and that they keeping smiling. Tom reports that since Jesus hasn’t known Egan very long he keeps trying.

Angela says Rick and Egan talk while Egan is in prison and it really is Rick trying to work his way through everything that has happened. It is almost like therapy.
Angela says the writers don’t feel like Gods when they write the show. They are more like nerdy artists. They just don’t want to mess anything up. They try to work hard because they are fans of the show too and just want to keep everyone entertained. August the 12th will be a very special day. It is the mid-season premiere of Fear the Walking Dead. A trailer is shown of Fear the Walking Dead which showcases the group trying to learn from the past so they don’t repeat it.

The sneak peak of the new season shows Daryl smoking and talking to Carol. She is happy with Ezekiel and Daryl is happy for her. Angela shares that the new characters in the show this season include Magna Luke and Connie who is deaf. Her sister is Kelly and will use sign language to communicate.

The departure of Andy’s character will have a huge impact on everyone. How do you go on without Rick? Tom tells a fan that his eyes are why people think of him as soulful. The season premiere will be Sunday, October 7th.