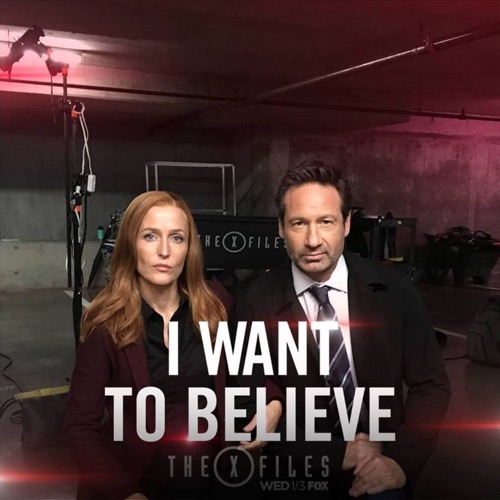 Tonight on FOX The X-Files returns with an all-new Wednesday, January 3, 2018 season 110 premiere called, “My Struggle III,” and we have your weekly The X-Files recap below. On tonight’s episode as per the Fox synopsis, “The Season 11 premiere picks up after the last event series’ cliffhanger with Mulder and Scully learning that they aren’t the only ones desperately searching for their long-lost son, William.”

Don’t forget to join us for our live recap tonight at 9:00 pm ET when The X-Files airs on Fox. While you wait for our The X-Files recap make sure to check out all our television recaps, news, videos, photos and more, right here

Tonight’s The X-Files episode begins now – Refresh Page often to get the most current updates!

Scully is on the ground unconscious while Mulder and several EMTs try to speak with her. She isn’t responding. Skinner shows up. The EMTs take her away.

At the hospital, the doctor comes out to tell Fox and Skinner that she is still unresponsive. They don’t know what is wrong with her. All they know is that she has abnormal brain activity. She shows them Scully’s brain waves and scans. Skinner recognizes something in the activity. Scully wants them to find someone. Mulder thinks what Skinner is saying is silly. Mitch tells him he is going to go look for answers. Mulder wants to stay behind with Scully. He sits by her bedside. Her eyes move rapidly as they are closed.

Jeff is throwing something away in a parking garage. A car tries to run him down. He gets out of the way. The driver gets out, screaming that he wants the boy.

The doctor comes in to talk to Mulder and Scully. The doctor has seen this before. She has memories, images, and possible superhuman abilities. Scully tells her she is not a part of any experiences. Mulder shares that maybe she was. She urges him to find the smoking man. He leaves to investigate.

Jeff calls Mulder while he is driving. Jeff tells him about the man looking for William. Mulder realizes that he is being followed. He drives faster. The man does too. Meanwhile, the smoking man talks to a woman, a friend named Monica. He knows Mulder will find him. Mulder runs several red lights in his Mustang and loses the man who gets stuck in a pocket of traffic.

Mulder follows the ma,n who was chasing him earlier, to a house 7 hours away. He peeks into the window. He enters through the front door with his gun raised. He makes his way through the foyer and into an office where a man sits smoking as he talks to an older brunette.

Skinner gets into his car after looking for Scully. Monica puts a gun to his head. The smoking man gets in. Meanwhile, Scully attempts to drive but gets into an accident and crashes the car.

With his gun aimed at the man and woman in the room, Mulder demands to know where the man with the smoking gun is. The man doesn’t know but what he does know is that the smoking man plans to wipe out the human race with a virus he plans to release.

The smoking man offers Skinner immunity to the alien virus he plans to release in exchange for the boy. Both Scully and William are already immune. Mulder is not. Meanwhile, Agents Liz and Kyd bring Scully back to the hospital.

Skinner turns a gun on the smoking man. He wants to know why he wants William.

The same man who followed Mulder earlier comes into Scully’s room. He tries to suffocate her to death with her pillow as she sleeps. She fights back. While he is on top of her on the floor, Mulder comes in and slits his throat.

Sometime later, Scully reassures Mulder that William will find them and she is sure the men will not find William. They just need to work on their cases and be patient. Skinner comes in. Mulder asks him where he has been. He tries to dodge the question. Mulder can tell he is keeping something from them and he wants to know what. Mulder shoves him and Skinner shove him back. Skinner leaves as he thinks about what he learned earlier from the smoking man, who told him that he is William’s real father. He impregnated Scully with alien DNA 17 years prior.