The Young and the Restless Recap for Wednesday, September 5: Lily’s in Prison – Summer and Phyllis Face Off – Dina Vanishes 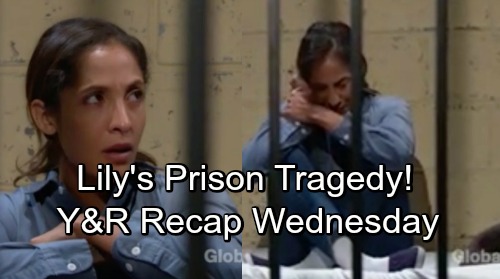 The Young and the Restless (Y&R) recap for Wednesday, September 5 reveal they wasted no time with Lily (Christel Khalil) being placed in prison. She went straight from the court house to prison cell. Her family left with nothing but shock and devastation. Cane (Daniel Goddard) attempts to keep some normalcy as its the first day of their last year of high school for Charlie (Noah Alexander Gerry), who wants nothing to do with school and Mattie (Lexie Stevenson), who simply wants to honor their mom’s wishes.

Mariah (Camryn Grimes) finds Devon (Bryton James) at HWG, completely unaware of what transpired in court the day before. Devon feel guilty that Lily is in prison, but Mariah reminds him that it is because he stood up and spoke him mind that he saved her years of misery. Devon thanks her for those words but the process will take much longer to sink in.

Nate (Brooks Donnell) comes to see Devon, saying he doesn’t blame him at all for what happened in court. Lily’s confession was her own decision and he be proud for standing up for his sister; but when Nate suggests filling in paperwork about seeing her in prisons, Devon reminds him that he meant every work he said but ha no intention of seeing her again, she took his wife and baby away, no time will ever fix that.

A sunburnt, Summer (Hunter King) comes charging into her apartment, screaming out for her mother, Phyllis (Gina Tognoni). After searching the whole place, she finds a note, welcoming her home and informing her that her and Billy (Jason Thompson) have moved out. Lucky her can enjoy the place on her own!

At the Abbott manse, it doesn’t take long for Phyllis to warn Kyle (Michael Mealor) that a massive summer storm is headed their way. Kyle doesn’t mind because he is working from home today, enjoying a Matinee day with Dina (Marla Adams). Phyllis thinks its beautiful how he dotes on a woman who doesn’t even know who he is – grandmother or not!

Summer barges into the Abbott home and immediately starts arguing with Phyllis. Dina shockingly wants to know what is going on. Summer calls her mother a kidnapper, while Phyllis says her daughter pushed her luck too far and was lucky to get off as easy as she did.

The fighting continues, and Kyle again orders them to leave, but Dina insists if they are going to stay, they may as well speak up so she doesn’t have to strain to hear what they are saying! Who doesn’t love this sassy woman!?

Cheaters and Lairs become part of the conversation as Summer says, “like mother, like daughter” and, “you just keep proving it!” Phyllis, tired of Summer’s threats, hands her the phone daring her to call Billy. She bet that if she did, Billy and Phyllis would be the couple to survive in the end, while Nick (Joshua Morrow) and Sharon (Sharon Case) would not; and the only one hurt in the end would be Summer’s little sister, Faith!

Dina finally orders Kyle to make them stop and he drags Summer out of the house. He asks Phyllis to make sure she has her tea before her nurse comes. Phyllis suggests they go for a walk, but then a business call interrupts them and Dina is supposed to wait outside the door for Phyllis.

Clearly, Tessa (Cait Fairbanks) is having a rough time at the coffeehouse and Mariah arrives in the nick of time to help her out during the coffee rush, When a break comes, she gives her a few pointers and tips before the next rush. Charlie arrives for an iced coffee, saying he has no school because there is a teachers’ conference, but when Tessa asks him about it, he vanishes from the coffeehouse.

Mariah offers to help Tessa pay these guys back, now that Crystal is settled but she refuses to take any of Mariah’s money. Tessa then spots Devon inside Crimson, ashamed about everything she did and then about the way she left the company. He can see through her, and wants to know what she wants.

She explains what happened with her sister and how these men are after her now and need a large sum of money. He suggests she find someone who doesn’t know her as well as he does; especially after she stole those lyrics from one of his closes friends, Mariah.

Kyle and Summer are at the coffeehouse where Summer is surprised to learn that Tessa and Mariah are together. Mariah returns home to work, while Tessa returns to Crimson counter to work, while Kyle leaves to return to the Abbott home, when Phyllis still cannot find Dina.

Kyle returns home tells Phyllis he has a tracker in her purse for this exact reason, although Dina doesn’t know. Phyllis shares how terrified she is at this new norm for all of them. She also has a new appreciation for Kyle.

Summer sends Billy a message, asking if he’d like to see her new tan lines, although no response yet. Tessa messages Mariah saying she misses her, but then Devon arrives at the house, wanting to talk to her about Tessa. He quickly telling her about Tessa approaching her, asking about a lot of money. Mariah explains that its for Tessa’s own protection, but Devon isn’t buying into the scheme.

In prison, Lily lays on her bed, crying as she holds onto her family photos tightly to her chest as you can hear the prison doors clang shut. At the same time Cane stands in his kitchen crying.