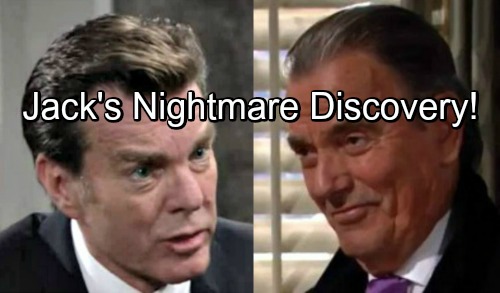 The Young and the Restless (Y&R) spoilers tease that Jack’s (Peter Bergman) father search will continue. Ever since Jack found out John (Jerry Douglas) wasn’t his biological dad, he’s been a bit lost. Jack feels like he’s missing a piece of himself. He can’t seem to move forward until he looks back, so he’ll keep seeking the truth in the coming weeks.

Will another old photograph have the answers? Jack will look into it, but there’s no guarantee this pic will pan out either. The last one featured Phillip Chancellor (Donnelly Rhodes), who turned out not to be Jack’s father after all. This could be the key to Jack’s hunt or it could be another obstacle along the way. Regardless, Jack won’t let it stop him from finding the real story.

Of course, Y&R characters should be careful what they wish for! The Young and the Restless spoilers say Jack could regret the revelations that follow. The journey to his father discovery will come with plenty of shockers. Sadly, some of them will be unpleasant.

Jack will ultimately realize that his worst nightmare could become a reality. What exactly does that mean? There are a couple possibilities that immediately spring to mind. For starters, Jack’s bio dad could be dead. All his efforts could be for nothing. Jack may never get to meet the man who helped Dina (Marla Adams) bring him into this world.

That’d naturally be hard on Jack since he’s currently losing his mother. He’s watching her slip further and further away every day. However, that may not completely qualify as nightmare material. Perhaps we should consider a far worse option that would leave Jack reeling.

The Young and the Restless already featured a terrible dream in which Victor (Eric Braeden) was Jack’s father. The math doesn’t add up, which Jack noted at the time. Nevertheless, Y&R could certainly make Jack and Victor brothers. If Jack’s dad is also Albert Miller (George Kennedy), that could lead to the horrifying news that he’s closely related to Victor. That’d qualify for the nightmare category!