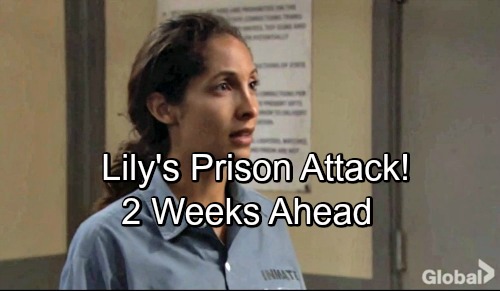 The Young and the Restless (Y&R) spoilers tease that Lily’s (Christel Khalil) struggles will get even worse. She’s dealing with a lot of guilt right now, so that’s adding to an already stressful situation. Lily’s life was turned upside down when she was sent to prison. To make matters worse, she must feel like she’s facing it alone.

Cane (Daniel Goddard), Charlie (Noah Alexander Gerry) and Mattie (Lexie Stevenson) are certainly in Lily’s corner. They’ve offered plenty of support, but popping in for visits here and there just isn’t the same. Lily can’t be home where she belongs, so that’s going to take a toll. It’ll get awfully lonely at Walworth!

Of course, Lily feels terrible about the chaos this creates for her family. She feels even worse about taking the lives of Hilary (Mishael Morgan) and her unborn child. However, a problem bigger than guilt may be brewing. Lily’s background and beauty make her a target in the slammer. She mentioned the threat to Cane a while back, so Y&R may be ready to bring some action soon.

During the week of October 8-12, the pressure will become too much for Lily to bear. Perhaps we’ll see some inmates harassing Lily. Since she’s already a big bundle of nerves and regrets, it wouldn’t take much to make her explode. She’ll be pushed to her limit, so perhaps she’ll lash out at the wrong person.

Will Lily land in danger? Could she become the victim of a vicious attack? It seems like a good option based on the hints Y&R’s dropped. The Young and the Restless spoilers say Lily’s prison storyline will heat up, so this is the ideal way to make that happen. It could also spark Cane’s fight to have Lily moved somewhere safer. The show has to keep the drama rolling along somehow.

Lily could be hospitalized if some angry convicts take this too far. The Young and the Restless fans will be anxious to see how much trouble Lily finds herself in. We’ll give you updates as other Y&R news comes in. Stay tuned to the CBS soap and don’t forget to check CDL often for the latest Young and the Restless spoilers, updates and news.