The Young and the Restless Spoilers: Ashley’s Exit Shocker – Mal Young Promises She’ll Be Back for New Story 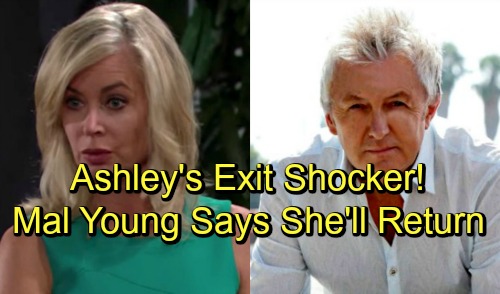 The Young and the Restless (Y&R) spoilers tease that we’ve got new info about Ashley’s (Eileen Davidson) upcoming exit. Since Ash will be leaving Genoa City soon, it’s a real bummer for fans. After Davidson posted an Instagram video from her last days on set, viewers feared this was truly a final departure.

Fortunately, that’s not the case! Davidson will indeed be making a comeback down the road. Mal Young, Y&R’s head writer and executive producer, promised that fans would be seeing Ashley again. In an interview with Soap Opera Digest, Young offered some great hints about Ashley’s exit storyline. He also mentioned that Davidson will return from time to time.

“She and I have got an agreement that Ashley is just popping off more [for] a little while,” Young insisted. “She’s still going to be a massive part of the show.” Young called this a “little time-out” so Davidson could take a breather from the soap grind and try new things. However, he assured Y&R watchers that Davidson “wants to keep this character very much alive.”

Young revealed that he’s always been impressed by Davidson’s work, so he wanted to give her an exit she could sink her teeth into. He talked about how this allowed the show to go somewhere it normally wouldn’t. Basically, Young’s taking lemons and making lemonade. Since Ashley’s leaving, we’ll get some explosive drama that wouldn’t have happened otherwise.

Young hinted, “For Ashley’s exit, it gives us the biggest Abbott story and twist in years!” Could Ashley be behind Jack’s (Peter Bergman) paternity mystery? Did she rig the tests to get revenge and seek power? It seems a bit extreme to dupe Jack and cause so much pain, but it lines up with all these teasers we’re getting. It would also give Ashley a reason to leave Genoa City in shame.

Of course, Y&R couldn’t just leave the Abbott family so fractured. Jack and Ashley would have to repair the damage sooner or later. That could fit with Young and the Restless spoilers about Ashley’s eventual return. “There’ll be a moment in the future when she’ll be back and we’re doing a big new story for her,” Young said. Maybe fixing some bonds within in the Abbott clan will be part of that.

For now, The Young and the Restless fans can expect some shockers. The show will do some very special episodes leading up to Davidson’s departure. It’ll be a weeklong event of must-see TV! We’ll give you updates as other Y&R news comes in. Stay tuned to the CBS soap and don’t forget to check CDL often for the latest Young and the Restless spoilers, updates and news.