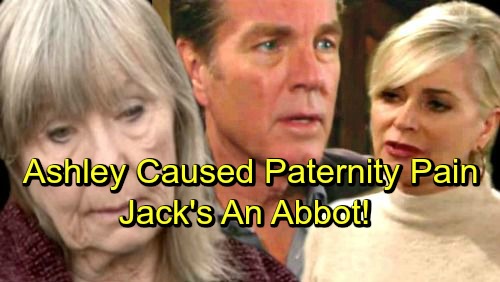 The Young and the Restless (Y&R) spoilers reveal that the CBS soap has quite a conundrum. Y&R set up a paternity mystery for Jack (Peter Bergman), but he’s only faced disappointing dead ends. Jack really thought he was on the verge of a shocking discovery when he found that photo. Now he’s eliminated all the options, so what’s he going to do?

On Tuesday, Jack and Victor’s (Eric Braeden) DNA test results prove they aren’t a match as brothers. Jack wasn’t a Chancellor or a Fenmore either, so that seemingly rules out Jack being part of an important Genoa City family. Y&R fans aren’t going to care if Jack’s father is just some nobody. Most of us are already upset that Jack isn’t an Abbott, so that would pile on the frustration.

Of course, The Young and the Restless has a chance to undo the damage. Ever since her Alzheimer’s diagnosis, Dina (Marla Adams) has always mistaken Jack for John (Jerry Douglas). Despite all the lover drama, that could be a hint about where things are headed.

The good news is Jack may be an Abbott after all. The bad news is it could mean dragging another character through the mud. There just may not be any other way around it. The Young and the Restless spoilers say Eileen Davidson (Ashley) has taped her final scenes, so her exit is just around the corner.

How’s the show going to explain Ashley’s abrupt departure? Perhaps a betrayal could kickstart it. Jack treated Ashley like garbage after her own paternity blew up. That blood-Abbott clause was cruel, so it’s understandable that Ash would want Jack to pay the price for that.

It’d be out of character for Ashley to rig the tests that disproved Jack as an Abbott, but it’s still a reasonable option. This may have been an attempt to score power and seek vengeance. Y&R hasn’t really provided clues about this scenario, but that means nothing. They probably didn’t know Ashley was leaving when they set up this story, so anything could happen now.

As we saw with Chelsea’s (Melissa Claire Egan) exit, stuff can come up out of the blue. Chelsea clearly wasn’t conning anyone until suddenly she was. Her departure was the only reason she turned back to her shady activities.

Likewise, Y&R could take Ashley down a dark path at the end. They might as well let Davidson go out with a bang and provide some great Daytime Emmy reel material. Can you imagine the mayhem that would result from this? Jack would be deeply hurt over Ashley’s deception. The rest of their loved ones could side with Jack as well.

After an emotional apology, Ashley might decide to leave town and do some soul-searching. She may be sorry that her plan spiraled out of control. That tends to happen when you scheme against someone you care about!

The Young and the Restless spoilers say Ashley’s exit will bring some strong emotions. Do you think she’s behind the paternity puzzle? Is Jack really an Abbott and is Ashley to blame for his recent pain? We’ll give you updates as other details emerge. Stay tuned to Y&R and don’t forget to check CDL often for the latest Young and the Restless spoilers, updates and news.