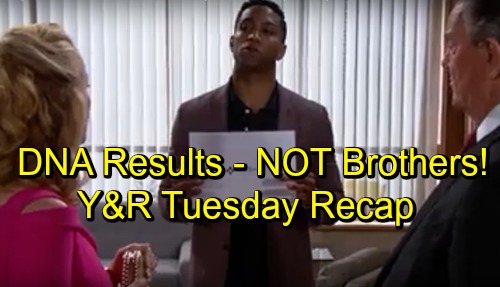 The Young and the Restless (Y&R) spoilers update and recap for Tuesday, September 25, tease that Sharon (Sharon Case) will get busted. She’ll be looking through J.T.’s (Thad Luckinbill) file when Rey (Jordi Vilasuso) walks in, but she’ll suggest it was out of curiosity. Rey will point out that Sharon’s awfully close to the case. He’ll hint that criminals always slip up, but Sharon will rush off before their chat can continue.

Meanwhile, Mariah (Camryn Grimes) will be a bit frazzled at the cottage. She’ll just want Sharon’s bridal shower to be perfect. After getting a pep talk from Tessa (Cait Fairbanks), Mariah will turn her attention to Nick (Joshua Morrow). She’ll hope to get rid of him before the festivities begin, so he’ll head upstairs to quickly change clothes.

Next, Sharon will show up and learn the pre-party’s happening at home. The ladies will get glammed up there before the real bash begins. Summer (Hunter King), Abby (Melissa Ordway) and Victoria (Amelia Heinle) will arrive soon after. When Nick comes downstairs, he’ll drop quite a bomb on Sharon. She’ll be stunned when he reveals a picture of their brand-new house.

Nick will want to move in right after they tie the knot, but Sharon will seem upset. She’ll argue that they should’ve made this choice together. After Nick defends his desire to build a bright future with Sharon, he’ll take off. Y&R spoilers say Sharon’s confession will bring the next round of drama. She’ll worry Nikki (Melody Thomas Scott) and Victoria when she admits Rey caught her snooping.

In a moment alone, Nikki will notice Sharon appears wistful. She’ll push the bride-to-be to share what’s bothering her, so Sharon will come clean about her moving concerns. The Young and the Restless spoilers say Nikki will understand Sharon’s perspective. They’ll reflect on their complicated history before Nikki assures Sharon of her respect.

Nevertheless, Nikki will think this move could be good for “Shick.” She’ll encourage Sharon to see the positives and let her relationship grow. That’s when Sharon will deliver another Young and the Restless shocker. She’ll insist that she can’t let secrets hang over this marriage. Sharon will vow to tell Nick the truth about J.T.’s death!

Elsewhere, Victor (Eric Braeden) and Jack (Peter Bergman) will get the DNA test results. Nate (Brooks Darnell) will reveal that they’re not a match, so they’ll both be relieved. That’ll leave Jack back where he started, but at least he’s not related to a fierce enemy. Nick will congratulate Jack when he hears the news. He’ll also fill Jack in on the new house he plans to move in to with Sharon.

Jack will think it was awfully daring to set that up as a surprise. However, Nick will just be focused on making everything the best it can be. He’ll hope for a wondeful life with Sharon, but disaster’s only a few days away! We’ll give you updates as other Y&R details emerge. Stick with the CBS soap and don’t forget to check CDL often for the latest Young and the Restless spoilers, updates, and news.