The Young and the Restless Spoilers: Phyllis Melts Down As Her World Crumbles – Secrets and Lies Suddenly Revealed

BY hellodrdavis on September 24, 2018 | Comments: one comment
Related : Soap Opera, Spoiler, Television, The Young and the Restless 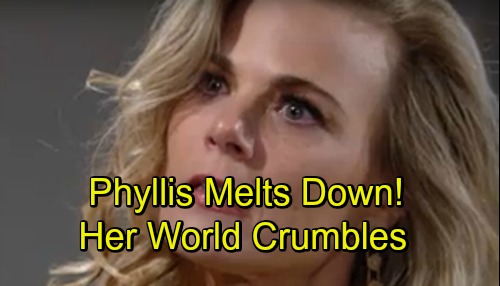 The Young and the Restless (Y&R) spoilers tease that Phyllis (Gina Tognoni) is in for some more tough times ahead. She’s been right in the middle of Billy’s (Jason Thompson) gambling problem for a while now, and that ended with a failed intervention during which she was vilified for enabling Billy. But that’s not the least of Phyllis’ worries right now. She’s may just have two other issues blow up in her face.

First off, there’s Nick (Joshua Morrow), who will start feeling more and more guilty about keeping his one-night stand with Phyllis a secret from Sharon (Sharon Case). Y&R spoilers say that Nick will come to a decision: he’ll resolve to come clean with Sharon about the one-night stand. But when Phyllis hears about this, she’ll freak.

Phyllis won’t want her own relationship with Billy to suffer any more than it already has, and she knows that if Sharon finds out about her night with Nick, Billy will surely find out, too, and that will probably be the end of their relationship.

Worse, while all of this is going on, Sharon will be coming to her own decision. Y&R spoilers say that Sharon will debate telling Nick about what really happened to J.T. (Thad Luckinbill) on girls’ night. Sharon won’t want any secrets between herself and Nick, but of course if she tells Nick what happened, she’ll also be implicating Phyllis, Victoria (Amelia Heinle), and Nikki (Melody Thomas Scott).

If Sharon does spill the beans and Nick is let in on the girls’ night secret, then Phyllis will probably freak out. Chances are, Nick will keep the secret, too, but Phyllis will lose a lot of the control she currently has over the situation. Phyllis likes being in full control of possibly volatile situations, and the loss of control will probably cause her great stress.

How will Phyllis handle these secrets getting spilled, if indeed both Nick and Sharon tell each other the truth? It may be too much for Phyllis to handle, especially with all of her Billy drama simultaneously going on. We might just see a full-scale Phyllis meltdown.

Do you think Phyllis will be able to cope with all of this newfound stress and the spilled secrets? Stay tuned to the CBS soap and don’t forget to check CDL often for the latest Young and the Restless spoilers, updates, and news.