BY Heather Hughes on September 24, 2018 | Comments: one comment
Related : Soap Opera, Spoiler, Television, The Young and the Restless 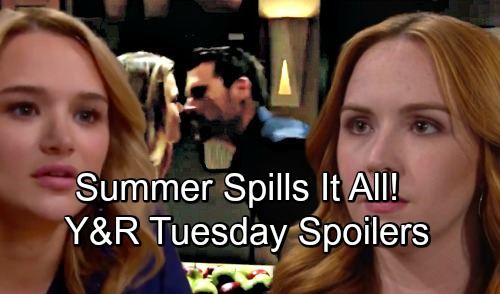 The Young and the Restless (Y&R) spoilers for Tuesday, September 25, tease that Jack (Peter Bergman) and Victor (Eric Braeden) will get the news they’ve been waiting for. They’ll find out if they’re half-brothers or if they can just go back to their normal lives. Based on all the clues out there, it appears the DNA results may confirm Victor and Jack as siblings.

If so, that’ll bring plenty of drama for these two to deal with. Y&R could backtrack at some point and claim the test was altered, but they can unpack some deeper issues in the meantime. Victor will also focus on his relationship with Matt (Richard Gleason) this Tuesday. The Young and the Restless spoilers say Victor will surprise his brother by trying to patch things up.

Matt should be glad that Victor’s warming up to him. If Jack’s joining their family, Matt will want to reach out to him, too. However, this mild-mannered Miller isn’t all that he seems to be. Y&R spoilers say Matt’s got some ulterior motives, so those should slowly unravel. It should be interesting to see what Matt’s real agenda looks like.

Across town, Summer (Hunter King) will get on Mariah’s (Camryn Grimes) last nerve. These two certainly don’t get along on any given day, but Summer will be especially annoying on this occasion. Mariah’s been buried in “Shick” wedding plans for months, so she won’t be in the mood for conflict right before the nuptials.

Of course, Summer will fire back that the story’s true. She’ll needle Mariah as Kyle (Michael Mealor) does his best to play peacemaker. Mariah will finally vow to tell Sharon (Sharon Case) what Summer’s been up to. She won’t want her mom to think there’s anything to back up this gossip.

That’s when Kyle will intervene. He’ll insist that it’d be better if Mariah just stayed mum, so her heart will sink. It’ll be enough to confirm Summer’s claims. The Young and the Restless spoilers say Kyle and Mariah will have a heated debate. In the end, it’ll be up to Mariah to decide what she wants to spill.

The wedding will move forward during the week of October 1-5. That at least tells us Mariah won’t come clean immediately – if she does at all. Nick and Sharon are probably poised for some disastrous nuptials anyway, so be sure to tune in. We’ll give you updates as other details emerge. Stick with Y&R and don’t forget to check CDL often for the latest Young and the Restless spoilers, updates, and news.