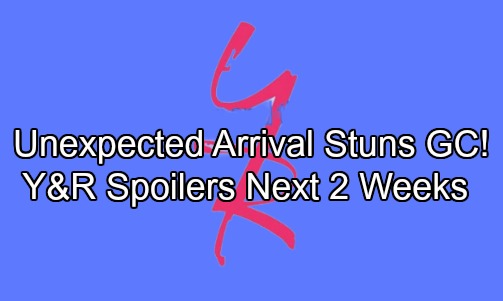 The Young and the Restless (Y&R) spoilers for the next two weeks tease that some struggles are ahead in Genoa City. During the week of September 24-28, Devon (Bryton James) will wrestle with his heartache. Grief comes in waves and several different stages. Devon can’t just snap his fingers and move on after the blows he’s been dealt.

Nevertheless, Devon will at least try to make progress. He’ll hope he can pick up the pieces of his broken life and find a new normal. Meanwhile, Nick (Joshua Morrow) and Sharon (Sharon Case) will make big decisions separately. They’ll decide to come clean about their respective secrets, but the other people involved will do their best to thwart those plans.

Phyllis (Gina Tognoni) will work to convince Nick that their hookup should stay under wraps. Nikki (Melody Thomas Scott) will want Sharon to let the J.T. (Thad Luckinbill) shocker stay buried, too. There’s a good chance Sharon and Nick will ultimately bail on their admissions.

Over with Billy (Jason Thompson), he’ll explode at his intervention. The Young and the Restless spoilers say Billy will shut down the idea of rehab, so his family will remain concerned. Later, Ashley (Eileen Davidson) will choose to take charge of a difficult situation. She may believe she has no choice but to expose Billy’s embezzlement.

Nikki (Melody Thomas Scott) and Abby (Melissa Ordway) will also team up, so that may involve Jack (Peter Bergman). The DNA results will be revealed soon enough. If Jack turns out to be Victor’s (Eric Braeden) brother, Abby and Nikki may hope to ease some tension between the new siblings.

In prison, Lily (Christel Khalil) will confess something painful. Has someone been harming her behind bars? Will she fear that her family won’t need her anymore? Lily will open up to a visitor, so Y&R fans will be curious to see what she divulges.

The week of October 1-5 will deliver even more drama. Ashley will make a daring move, which could involve a Jabot power play. However, the main event will be Nick and Sharon’s looming nuptials. Their wedding day will finally arrive, but a secret will weigh on Mariah (Camryn Grimes). She’ll be in the loop on Phyllis and Nick’s one-night stand by then, so she’ll battle guilt about staying quiet.

Rey (Jordi Vilasuso) will keep his eyes and ears open along the way. He could cause issues sooner than Sharon thinks. The Young and the Restless spoilers say Victoria’s (Amelia Heinle) life will be turned upside down soon. Will Rey figure out too much? Are some cover-up crew bombs about to drop?

Rey might even face a bombshell of his own. The Young and the Restless spoilers state that somebody unexpected will show up in GC. Will it be the wife Rey’s separated from? That’s one possibility to consider. Regardless, some great Y&R surprises are in store.

It sounds like the next two weeks will bring some exciting episodes. We’ll give you updates as other Y&R news comes in. Stay tuned to the CBS soap and don’t forget to check CDL often for the latest Young and the Restless spoilers, updates and news.