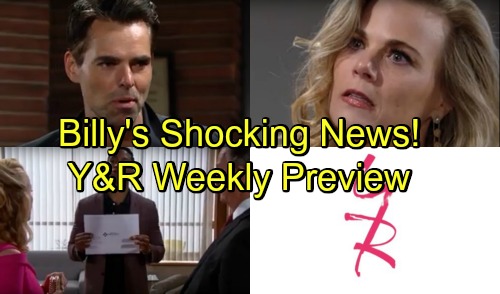 The Young and the Restless (Y&R) spoilers for week of September 24-28 tease that several Genoa City residents will face startling news. First, Phyllis (Gina Tognoni) will pry a shocking admission out of Billy (Jason Thompson). He’ll confess that he stole money from Jabot, so Phyllis will realize things could get ugly.

Later, Phyllis will discuss Billy’s drama with Jack (Peter Bergman). The Young and the Restless spoilers say Jack will sense the panic in Phyllis’ eyes. He’ll wonder just how deep Billy’s in. Phyllis trusts Jack, especially since they both care about Billy’s well-being. She may tell him the truth and hope they can somehow fix this mess. Phyllis won’t want to see Billy’s life crumble right in front of her.

To make matters worse, Nick (Joshua Morrow) will decide to come clean about the hookup. Phyllis will undoubtedly suggest that it’s the worst possible thing he could do – and at the worst possible time! “Philly” is already on shaky ground, so Nick’s confession to Sharon (Sharon Case) could mean disaster for all four of them.

Phyllis will do whatever she can to prevent Nick from spilling their secret, but Sharon will want to spill one of her own. She’ll inform Nikki (Melody Thomas Scott) that she needs to tell Nick about J.T.’s (Thad Luckinbill) death, but that’ll get a fierce objection. Like Phyllis, Nikki will do everything in her power to prevent more damage from being done.

Other Young and the Restless spoilers say Jack and Victor (Eric Braeden) will get the scoop on their DNA. The results will land in Nate’s (Brooks Darnell) hands, so he’ll hold them up and ask if they’re ready. Victor and Jack could never be ready for a revelation like this, but they’ll listen up anyway.

Y&R’s weekly promo shows Victor declaring that this changes nothing about their relationship. Jack can also be seen looking pretty miffed. The Young and the Restless buzz suggests these two could be confirmed as half-brothers. Will those DNA results stick or did Matt (Richard Gleason) resort to some trickery behind the scenes? Time will tell, but Vic and Jack could face their worst nightmare for now.

It sounds like another exciting week’s ahead on the CBS soap. We’ll give you updates as other details emerge. Stay tuned to Y&R and don’t forget to check CDL often for the latest Young and the Restless spoilers, updates and news.