BY Marcy Cohen on September 21, 2018 | Comments: one comment
Related : Soap Opera, Spoiler, Television, The Young and the Restless 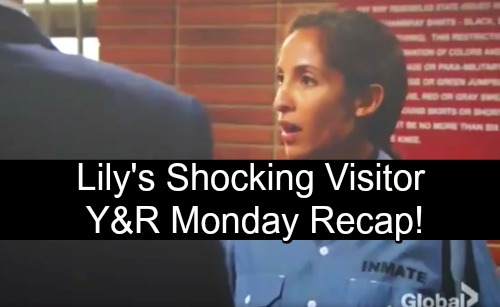 The Young and the Restless (Y&R) spoilers update and recap for Monday, September 24, tease that Lily (Christel Khalil) will get a surprising visitor. Jill (Jess Walton) will show up at Walworth and offer her support. After Lily admits she’s worried about Cane (Daniel Goddard) and the twins, Jill will push her to take care of herself. She’ll think Lily needs to be careful behind bars, so she’ll secure a promise.

Later, Lily and Cane will receive some shocking news. After wondering why Mattie’s (Lexie Stevenson) late to a family prison visit, they’ll eventually get their answer. The guard will inform them that Mattie’s been arrested. It turns out Mattie chained herself to the prison gates as a form of protest.

The Young and the Restless spoilers say Cane will be impressed on some level, but he’ll still give Mattie a lecture. Likewise, Lily will be both appreciative and concerned. Christine (Laralee Bell) will ultimately drop the charges, so that’ll be a relief for Lily. She’ll hate the idea of being the source of more drama.

Meanwhile, Billy (Jason Thompson) will be summoned for his intervention. When he arrives home with Phyllis (Gina Tognoni), he’ll quickly realize what’s happening. Y&R spoilers state that Billy will want to bail, but Phyllis will insist this is necessary. Jill, Victoria (Amelia Heinle) and the Abbott family will echo that Billy needs help.

Everyone will take turns trying to get through to Billy. Traci (Beth Maitland) and Abby (Melissa Ordway) will be particularly gently about their support. However, accusations will end up flying at Phyllis the enabler. Jill will blame her, but Victoria will rush to Phyllis’ defense. Jack (Peter Bergman) will pipe up that Billy made his own choices and needs to get his act together.

Ashley (Eileen Davidson) and Kyle (Michael Mealor) will weigh in as well. The whole gang will push for rehab, but Billy will be appalled over how they’re trying to force him off the throne. Things will remain heated as Billy rants about their attacks. He’ll eventually walk out and leave Phyllis looking like a train wreck.

Jack will also have a chat with Victor (Eric Braeden) on Monday. The Young and the Restless spoilers say they’ll toast to the hope that they’re not brothers. Vic and Jack will actually share a nice moment, but Nikki (Melody Thomas Scott) will battle her nerves. She’ll let Matt (Richard Gleason) know she’s worried about these crucial DNA results.

Later, Nate (Brooks Darnell) will tell Victor, Nikki and Matt that the results are in. They’ll anxiously await Nate’s updates at Newman Enterprises, so don’t miss the revelations ahead. We’ll keep you posted as other Y&R details emerge. Stay tuned to the CBS soap and don’t forget to check CDL often for the latest Young and the Restless spoilers, updates, and news.