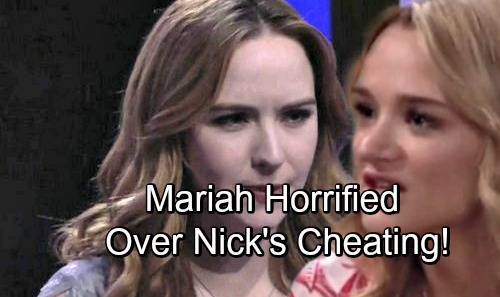 The Young and the Restless (Y&R) spoilers tease that the news of Phyllis (Gina Tognoni) and Nick’s (Joshua Morrow) hookup will spread. As usual, poor Mariah (Camryn Grimes) will get caught in the middle of Sharon’s (Sharon Case) drama! She’ll overhear the shocker and immediately ponder what her next move should be.

This isn’t the first time Mariah’s been privy to something that could hurt Sharon (Sharon Case) or someone else she loves. Even Sharon herself has been known to divulge stunning secrets and expect Mariah’s silence. There was the time Sharon pushed Mariah to keep her miscarriage a secret from Dylan (Steve Burton). Mariah also reluctantly hid the truth about “Sully’s” identity from Dylan and Nick.

Of course, Mariah was the keeper of Scott (Daniel Hall) and Abby’s (Melissa Ordway) sex secret as well. Since Sharon was dating Scott, Mariah was left to wonder whether she should come clean or trust that it was a one-time deal. Unfortunately, she’ll find herself facing the same predicament when she eavesdrops on Summer (Hunter King) and Kyle’s (Michael Mealor) chat.

Y&R spoilers say Summer will mention her parents’ one-night stand. An outraged Mariah will march over and accuse “Snowflake” of spreading gossip. She’ll think Summer’s just trying to stir the pot before Nick and Sharon’s big day. However, a conversation with Kyle will change the game. When Kyle urges Mariah to keep her mouth shut and leave this alone, Mariah will realize Summer’s claims must be true.

Naturally, that’ll leave Mariah in a real bind. The Young and the Restless spoilers say the “Shick” nuptials will only be one day away! Part of Mariah will want to just back off and let her mom be happy. She’ll want to believe that Nick truly made a mistake and won’t do it again.

At the same time, this is something Sharon should be in the loop on. Mariah may put herself in Sharon’s shoes and admit that she’d want to know in her position. That’s especially true after the way things went down with Scott. Should Sharon really marry Nick without hearing about his betrayal? Mariah will struggle to answer that question as the “Shick” marriage countdown begins!

Will Mariah blab about Nick’s cheating or stay quiet? Should she confront Nick and convince him to confess instead? Nick will definitely consider the idea this week, so maybe Mariah will be a factor. We’ll give you updates as other Young and the Restless details emerge. Stick with Y&R and don’t forget to check CDL often for the latest Young and the Restless spoilers, updates and news.