The Young and the Restless Spoilers: Shocking Paternity Twist, Christian Is Nick’s Son – Chelsea Destroyed Her Life for Nothing 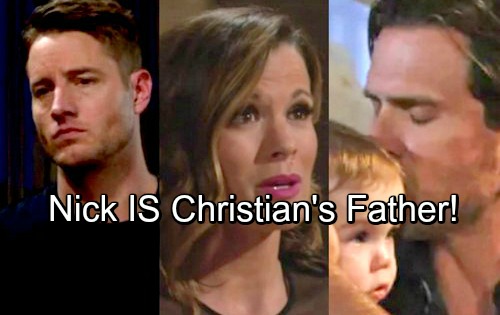 The Young and the Restless (Y&R) spoilers tease that Chelsea’s (Melissa Claire Egan) day of reckoning is drawing near. Phyllis (Gina Tognoni) is doing her best to expose Chelsea’s deception. She’s convinced of Chelsea’s guilt and intends to prove it soon enough.

Of course, Y&R fans know this is bigger than just a Chelsea 2.0 scam. Chelsea’s also hiding the truth about Christian’s (Jude and Ozzy McGuigen) paternity. In fact, that’s what set this whole plot in motion.

Chelsea made a pact with Victor (Eric Braeden) and they’ve been keeping Nick (Joshua Morrow) out of the loop ever since. Since Victor can’t be trusted, Chelsea tried to sock away some money so she’d be prepared. She knows how ruthless Victor can be. He proved that when he discovered the scheme and returned the cash to Lauren (Tracey E. Bregman). Chelsea’s safety net is gone!

However, Victor could pay the price for his silence as well. It’s significant that Y&R’s stirring up all the paternity drama again. It seemingly guarantees that the issue will be revisited as part of Chelsea’s departure. There a couple ways this could go. It’s possible Nick will be crushed over the news that Christian isn’t his son. That could set up some other storylines moving forward.

Another option is to let everything blow up for the sake of a February sweeps shocker. Then, they can pull off a twist at the end. Let’s say all this snowballs and Nick discovers the big secret. He could rip into both Chelsea and Victor for deceiving him.

Nick’s world would be shattered as he realizes his son is actually his nephew – or is he? Now that Chelsea’s leaving, it seems unlikely that we’ll see Adam’s (Justin Hartley) long-term return. A recast might pop up for Chelsea’s final scenes, but that’d probably be it. Adam could still come back if Chelsea returns down the road, but that could be many years from now or even the twelfth of never.

There’s really no reason for Christian to be Adam’s son without the other key players in this story. Paternity tests are often wrong on soaps. Victor may even be to blame for a switcheroo. He may have thought it’d be a good way to keep everyone in line.

Nick could battle his fears and confide in Sharon (Sharon Case) while he awaits paternity confirmation. He could be truly sorry for the way he acted after Sharon discovered Sully was Christian. Nick would finally understand what it was like for Sharon back then.

The Young and the Restless could hit all the right beats and ultimately reveal that Nick’s the father after all. Plus, Chelsea would have to deal with the fact that she destroyed everything over a lie. She drove herself crazy over this secret and eventually carried out the Chelsea 2.0 scheme to protect herself. Chelsea never would’ve done that if it hadn’t been for Christian’s paternity.

Would you like to see Y&R take this route? Do you think Christian should be Nick’s biological child after all? The Young and the Restless spoilers say some great scenes are coming up, so stay tuned. We’ll give you updates as other details emerge. Stick with the CBS soap and don’t forget to check CDL often for the latest Young and the Restless spoilers, updates and news.