BY Heather Hughes on February 14, 2018 | Comments: one comment
Related : Soap Opera, Spoiler, Television, The Young and the Restless 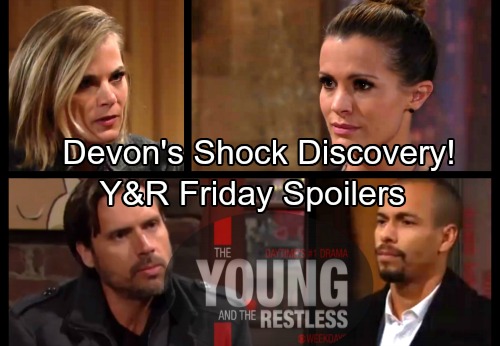 The Young and the Restless spoilers for Friday, February 16, tease that Nick (Joshua Morrow) will have a big decision to make. Thursday’s episode brings a proposal from Chelsea (Melissa Claire Egan), so Friday will bring Nick’s answer. Once Chelsea assures Nick of her deep love, he’ll decide marriage sounds like the right idea. They’ll look forward to creating a bright future together.

Of course, Y&R fans know they won’t get the chance. Chelsea’s exit is looming, so this engagement bliss will be short-lived. Nevertheless, Chelsea will remain hopeful for now. She’ll be convinced that she can handle Victor’s (Eric Braeden) threats. She won’t even give him much thought as she prepares for her upcoming wedding.

However, Phyllis (Gina Tognoni) could present a real problem. J.T. (Thad Luckinbell) offers expected confirmation on Thursday. Victor gave Lauren (Tracey E. Bregman) a briefcase full of money and the serial numbers match the cash found in Chelsea’s penthouse. The Young and the Restless spoilers say Phyllis may taunt Chelsea with that info on Friday. She’ll feel confident that Chelsea’s going down!

Chelsea will do her best to regain control of the situation. She’ll warn Phyllis to back off or else there could be serious consequences. Chelsea might even score some dirt on Phyllis to keep her quiet. Even mentioning Victor could help. Chelsea might argue that Phyllis wouldn’t want to get on Victor’s bad side.

Regardless, Chelsea will threaten her enemy and hope that she can keep her dreams alive. Phyllis probably isn’t going to let this go, but she may have to find a sneakier way to expose the truth. There has to be a solid strategy she can use. Nick deserves to know about Chelsea’s deception, but Phyllis needs to protect herself.

At Top of the Tower, Noah (Robert Adamson) will make a special announcement. Y&R spoilers state that he’s leaving town. Noah intends to work in an overseas division of Newman Enterprises, so it’ll be time to say goodbye soon.

Elsewhere, Devon (Bryton James) will discover a shocker. The Young and the Restless spoilers say he’ll learn a secret that could make some real waves. Does this involve Tessa (Cait Fairbanks) and her shady past? The show might plan on writing her out as well.

Whatever the case, Devon will eventually be sorry he let Tessa stay at Hamilton-Winters. This could easily be the secret that sparks his regrets. If not, there’ll surely be another hot scoop waiting for him on Friday. We’ll give you updates as other Y&R news comes in. Stick with the CBS soap and don’t forget to check CDL often for the latest Young and the Restless spoilers, updates and news.