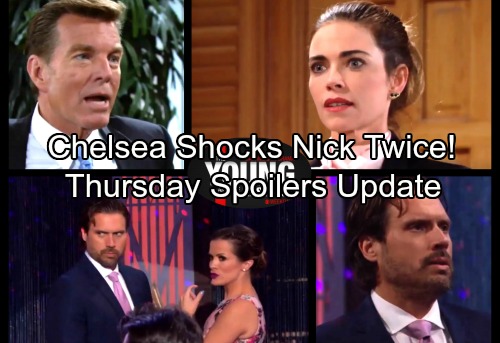 The Young and the Restless (Y&R) spoilers for Thursday, February 15, tease that J.T. (Thad Luckinbell) will try to talk to Victoria (Amelia Heinle) at Crimson Lights. She’ll brush him off and insist that it’s time for work. Later, J.T. will make another attempt at Newman. He’ll offer an apology for lashing out last night. J.T. will suggest that his jealousy just makes him crazy sometimes.

Victoria will concede that maybe it wasn’t appropriate to dance with Billy (Jason Thompson). They’ll kiss and make up, but something tells us that won’t be J.T.’s last outburst! Victoria will also meet with Jack (Peter Bergman) on Thursday. She’ll want to know if he’s on board with her plot.

Jack will go along with the idea since he wants Ashley (Eileen Davidson) away from Victor (Eric Braeden) and back at Jabot. He’ll wonder what Victoria’s got cooking. The Young and the Restless spoilers say Victoria will mention something she shared with Victor. She dropped a hint about Ashley being Jack’s spy.

Victoria will want to make it look like her suspicions were correct. Back at Newman, Ashley will hand over some confidential papers. Y&R spoilers say Victoria will place them in an envelope and call Jack to set up another meeting. She’ll give Jack the papers and contend that the watermark is the ticket. Now that Jack has this info, it’ll serve as proof that Ashley’s spying.

Other Young and the Restless spoilers say Phyllis (Gina Tognoni) will seek a confession from Victor. She’ll urge him to admit he got the stolen cash from Chelsea (Melissa Claire Egan). Victor will refuse to divulge anything. He’ll eventually kick Phyllis out, so she’ll have to await word from J.T.

Fortunately, J.T. will confirm that the serial numbers match. The money Lauren (Tracey E. Bregman) received is the same money Nick (Joshua Morrow) took to the police station. Phyllis will be pleased that her hunch was right. She’ll determine that Victor must have major dirt on Chelsea.

At the penthouse, Noah (Robert Adamson) will show up after a chat with Victor. He’ll tell Nick that he has a big announcement to make at Top of the Tower tomorrow. Later, The Young and the Restless spoilers state that Chelsea will have a two-part surprise. She’ll hand over a cheeky T-shirt and suddenly deliver a marriage proposal.

Nick will certainly be shocked by Chelsea’s bold move. He’ll accept her offer on Friday, so stay tuned for more drama. We’ll give you updates as other Y&R news comes in. Stick with the CBS soap and don’t forget to check CDL often for the latest Young and the Restless spoilers, updates and news.