The Young and the Restless Spoilers: Week of September 24 – Ulterior Motives, Brother Bonding and Stunning Revelations

BY Heather Hughes on September 21, 2018 | Comments: one comment
Related : Soap Opera, Spoiler, Television, The Young and the Restless 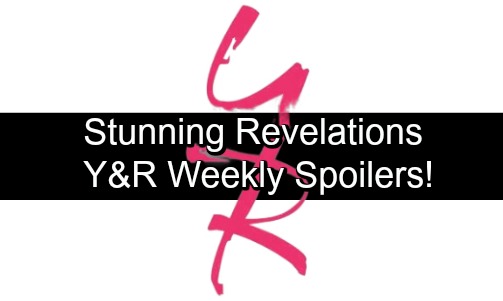 The Young and the Restless (Y&R) spoilers for the week of September 24-28 tease that some troubling situations will arise in Genoa City. For starters, Billy (Jason Thompson) will be ambushed for a good cause. His gambling addiction is spiraling out of control, so his family will want to take action before it’s too late.

However, Y&R fans can expect some ulterior motives at Billy’s intervention. Kyle (Michael Mealor) clearly wanted this to happen. Although Ashley (Eileen Davidson) cares about Billy, she’ll end up shifting the focus to Jabot as well. Even Jack (Peter Bergman) and Jill (Jess Walton) may not handle this exactly like they should.

Fortunately, Traci (Beth Maitland) and Abby (Melissa Ordway) will do their part to make Billy feel loved. They’ll try to show them that he’s gone too far and needs to get some help. Phyllis (Gina Tognoni) will also play a crucial role here. She’ll keep Billy from bailing on the intervention altogether, so at least he’ll hear the gang out.

Other Young and the Restless spoilers say Jack and Victor (Eric Braeden) will do something surprising. They’ll actually begin to bond! If these two are indeed brothers, it’d be great if they could truly form a connection. The DNA results will come in this week, so they’ll be eager to learn the truth.

Y&R buzz hints that they may be a match as siblings, but the results may or may not be accurate. Regardless, the peace never lasts when it comes to Vic and Jack! They’ll inevitably end up clashing again before you know it. Speaking of clashing, Summer (Hunter King) and Mariah (Camryn Grimes) will do some of that this week. A stunning secret will explode and cause some trouble between them.

Mariah will overhear Summer running her mouth about Nick (Joshua Morrow) and Phyllis’ (Gina Tognoni) one-night stand. She’ll think Summer made up the story initially, but Kyle’s reaction will ultimately tell her it’s true. Once Mariah accepts that Nick betrayed Sharon (Sharon Case), she’ll wonder if she should wreck the wedding or stay tight-lipped.

Meanwhile, Nick will tell Phyllis that he intends to come clean. If Mariah mentions what she knows, that could certainly affect whether or not Nick goes through with it. Sharon will intend on making an admission as well. She’ll believe Nick needs to know about J.T.’s (Thad Luckinbill) death before they tie the knot. Nikki (Melody Thomas Scott) will try to stop Sharon, so Y&R fans will see if she succeeds.

Other Young and the Restless spoilers say Lily (Christel Khalil) will struggle behind bars. Her depression will worsen as she faces this harsh new reality. Cane (Daniel Goddard) will want to be there for Lily, but she’ll still feel like an outsider. When Lily gets the news of Mattie’s (Lexie Stevenson) arrest, it’ll only add to her heartache. Lily will feel like her family’s falling apart and it’s all her fault.