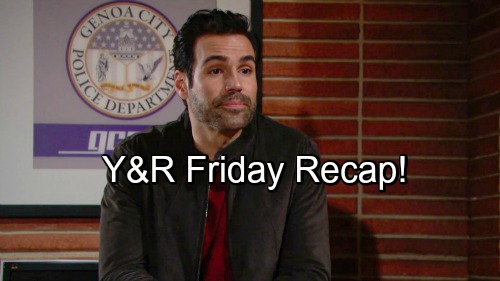 The Young and the Restless (Y&R) spoilers for Friday, September 21, tease Sharon (Sharon Case) will have second thoughts about her new victim liaison position. She’ll express concern to Nick (Joshua Morrow), who’ll push her to go for it. Nick won’t think Sharon should hold Rey’s (Jordi Vilasuso) previous actions against him. He won’t want her letting self-doubt creep in either.

Once Sharon’s convinced, she’ll head to the police station and get her first assignment. Rey will bring Sharon up to speed on a case involving Ivy, a woman involved with a drug gang. Once they speak with Ivy, Sharon will gently make her see that the cops can protect her. Ivy will agree to testify, so Rey will be pleased with Sharon’s great work.

Later, Rey will text Paul (Doug Davidson) about the progress he made. He’ll feel confident that he can build trust with Sharon and get her to crack. Meanwhile, Kyle (Michael Mealor) will push Ashley (Eileen Davidson) to take action against Billy (Jason Thompson). She’ll admit she needs to protect Jabot, so Kyle will pipe up that Traci (Beth Maitland) should take the CEO spot for now.

Speaking of Traci, she’ll come home and have a serious conversation with Ashley. The Young and the Restless spoilers say Ash will share the news of Billy’s gambling. She’ll explain the dire situation and urge Traci to take over at Jabot. When Traci objects, Ashley will promise that her time on the throne will be brief. They just need to get Traci in there and do away with the blood-Abbott clause.

However, Traci will want to focus on Billy and his recovery. She’ll think an intervention is necessary. Back with Kyle, he’ll spar with Billy and let some arrogance shine through. Kyle will spook Billy by reminding him of how he screwed Jack (Peter Bergman) over. He’ll contend that moves like that have consequences, so Billy will be left to ponder Kyle’s hint.

At the athletic club, Matt (Richard Gleason) will refuse to help Jack learn the truth. He won’t to make any more waves with Victor (Eric Braeden). Once Nick (Joshua Morrow) appears, he’ll get updates on the situation and wonder if his own DNA would work. However, Jack will want Victor’s or Matt’s to be sure.

Y&R spoilers say Matt will finally come up with a solution. He’ll plan to seek a compromise with his brother. At Newman Enterprises, Matt will show up and push Victor to grant Jack’s request. He’ll feel like Victor’s letting the past hold him back. Matt will urge Victor to prove that Albert Miller (George Kennedy) no longer has power over him.

The Young and the Restless spoilers say that’ll do the trick for Victor. He’ll summon Jack and greenlight a DNA test. Nate (Brooks Darnell) will do the honors and suggest that the results will come quickly. Jack and Victor could know if they’re brothers by tomorrow!

It sounds like some fantastic drama’s in the works. We’ll keep you posted as other Y&R details emerge. Stick with the CBS soap and don’t forget to check CDL often for the latest Young and the Restless spoilers, updates, and news.