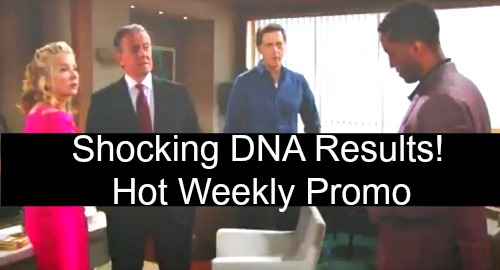 The Young and the Restless (Y&R) spoilers for the week of September 24-28 tease that secrets and shockers will cause chaos. For starters, the pressure will take a toll on Nick (Joshua Morrow) and Sharon (Sharon Case). Their wedding is rapidly approaching, so they won’t want to build a marriage on a foundation of lies.

Sharon will decide she has to come clean about the night of the party. She’ll fill Nikki (Melody Thomas Scott) in on her plan to tell Nick the truth about J.T. (Thad Luckinbill). Naturally, Nikki will think that’s a terrible idea. She’ll do everything she can to keep Sharon’s mouth shut and protect the rest of the cover-up crew.

Meanwhile, Nick will also plan a confession. He’ll tell Phyllis (Gina Tognoni) that he wants to admit they hooked up. Nick will think he can convince Sharon it was a one-time thing and they can all move on. Of course, Phyllis will react with fear and anger. She’ll feel like Nick’s relationship will be torn apart if he confesses.

Likewise, Phyllis won’t know if her own romance can survive that blow. Their relationship already strained thanks to all the gambling drama. Y&R spoilers say Billy’s addiction will bring another bombshell next week. Several loved ones will gather to stage an intervention, but it certainly won’t go well. Billy will lash out at his friends and family members for acting like he’s not in control.

Other Young and the Restless spoilers say Nate (Brooks Darnell) will deliver the DNA test results. Victor (Eric Braeden), Jack (Peter Bergman) and Matt (Richard Gleason) will eagerly await answers. Nate will eventually reveal whether Jack and Victor are brothers, so expect some jaw-dropping moments. They’re in for a shock, so that may mean the test will confirm the news.

However, there’s a chance some manipulation has gone down. Matt can’t be trusted, so you never know what twists might be in store. In prison, Lily (Christel Khalil) will enjoy another visit with Cane (Daniel Goddard). They’ll be together when some stunning updates come in. Cane and Lily will reel when they find out Mattie’s (Lexie Stevenson) been arrested.

Most Y&R fans would’ve expected Charlie (Noah Alexander Gerry) to be the one behind bars. Mattie’s supposed to be the smart, levelheaded twin! Nevertheless, it seems Lily’s incarceration has changed the game. This ordeal has been hard on the Ashby family, so let’s hope they cut Mattie some slack.