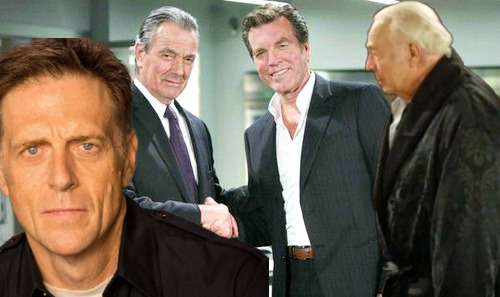 The Young and the Restless (Y&R) spoilers tease that Jack’s (Peter Bergman) plan will move forward whether Victor (Eric Braeden) likes it or not. Ever since Jack found out he wasn’t an Abbott, he’s been determined to learn the truth about his biological father. It’s led to some big twists he never saw coming, but the latest one has really thrown Jack for a loop.

Jack believes Albert Miller (George Kennedy) could be his real dad, which would make him Victor’s half-brother. Y&R fans can guess how much that would shake up Genoa City! The clashing between these enemies could certainly get even worse. Jack and Victor have fought for many years, but suddenly realizing they’re siblings could make their war soar to new heights.

However, these two need proof before they go any further. The Young and the Restless spoilers say Jack will try to get it with a little help from Matt Miller (Richard Gleason). Here’s where things get tricky. Can Matt truly be trusted? Some Y&R hints suggest that Matt’s involvement could be crucial. It’s possible he could be behind some paternity test manipulation.

The Young and the Restless has been letting all this drag out for a while, but it’s about to speed up. In an interview with Soap Opera Digest, Peter Bergman promised we’d see this hot plot move right along. “This is Jack’s last shot in the dark on this particular effort and he’s going to take it,” Bergman promised. “He’s also going to open a can of worms and from here, the story moves pretty quickly.”

That’s great news, but does it mean Jack and Victor will actually be brothers? The Young and the Restless spoilers say they’ll get some stunning updates on next week’s new episodes, September 24-28. That makes it seem like they’ll be shocked by evidence that they’re siblings. Of course, it’s tough to believe that’ll stick. The show’s paired up Summer (Hunter King) and Kyle (Michael Mealor) before, so revealing this now seems icky.

Y&R also doesn’t seem quite done with Kyle and Summer. There are still some complicated feelings, so they may want to revisit the pairing once Kyle and Lola’s (Sasha Calle) romance plays out. They could even do a Kyle, Lola and Summer love triangle. There’s no need to eliminate all the possibilities by truly making Jack part of Victor’s family.

Maybe Matt will resort to a little manipulation. The Young and the Restless spoilers say Matt will have a few things that he’s secretive about. He’ll have a hidden agenda, so we can’t rule out the idea that Matt will rig the test results. Victor and Jack could simply believe they’re siblings for a while.

Whatever the case, let’s hope Y&R brings viewers up to speed soon. Stories like this are more fun when fans know a bit more than the characters! We’ll keep you posted as other Y&R details emerge. Stay tuned to the CBS soap and don’t forget to check CDL often for the latest Young and the Restless spoilers, updates, and news.