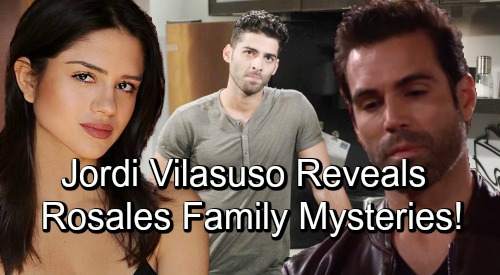 The Young and the Restless (Y&R) spoilers tease that some Rosales family secrets are set to explode. It’s clear that there’s plenty of tension among Y&R’s newest characters. Rey (Jordi Vilasuso) and Arturo’s (Jason Canela) issues are the most serious. They can barely handle being in the same room together, but that’s mostly because of Arturo’s apparent resentment.

Lola has a complicated relationship with her eldest brother as well. She nearly snapped Rey’s head off when he got pushy about her food truck permits and love life. Rey served as a paternal figure for both Lola and Arturo in the past. That undoubtedly led to some controlling behavior, so it’s easy to see why that’d be a touchy area for Lola at this point. She’s a grown, independent woman now.

It’s understandable that Lola would want Rey to back off and let her live her own life. Nevertheless, Lola loves Rey and will continue to make an effort with him. Winning Arturo over should be a much harder task. The Young and the Restless spoilers say some family mysteries will unravel down the road.

In a recent interview with Soap Opera Digest, Jordi Vilasuso dropped some hints about what’s ahead for Arturo and Rey. He noted that “there’s a bit of conflict and a grudge between them, which is pretty heavy.” Vilasuso talked about the bitterness that’s grown over the years they’ve spent apart. He warned that when the whole story is revealed, Y&R’s going to dive into some extremely sensitive issues.

“When it comes out, I think there will be a gasp from the audience,” Vilasuso said. Y&R fans can expect major fallout once all the shockers are exposed. There’s a good chance Lola will help Arturo and Rey come together eventually, but we should see some heartbreaking moments in the meantime. Shouting matches and some thrown punches seem like a safe bet.