BY Kinsley Goldman on September 25, 2018 | Comments: one comment
Related : Soap Opera, Spoiler, Television, The Young and the Restless 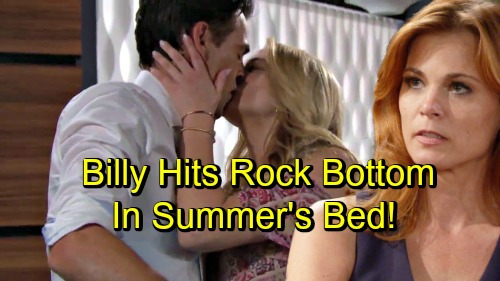 The Young and the Restless (Y&R) spoilers tease that Billy’s (Jason Thompson) gambling will continue to cause issues. He wasn’t happy about being ambushed by an intervention, so he warned his loved ones to just leave him alone. Billy isn’t willing to admit he has a problem, which will inevitably set him up for more trouble.

In Tuesday’s episode, Abby (Melissa Ordway) frets about how to handle the situation. She’s truly concerned for Billy’s well-being and wants him to get better. However, Victoria (Amelia Heinle) suggests the ball is now in Billy’s court. They came together to make him see the light, but Billy refused to open his eyes. Victoria just hopes that changes before Billy hits rock bottom all over again.

Of course, rock bottom indeed seems imminent. Why bother doing a story like this unless things get as bad as they could possibly get? Y&R’s set up some intriguing puzzle pieces and they could come together for a total nightmare. For starters, Billy’s most likely going to lose his CEO spot. His embezzlement should blow up in his face and leave him reeling.

Next, we’ll see some betrayal drama. Billy and Phyllis were on a break at the time of her one-night stand with Nick (Joshua Morrow), but she still should’ve been honest about it. Instead, Phyllis let it snowball into a secret that could destroy everything. Billy should view it as cheating and wonder if this is just what Phyllis does. Billy may hurl harsh insults about Phyllis’ pattern of unfaithfulness.

Meanwhile, Summer (Hunter King) will remain in a funk. She’s upset over losing her friendship with Kyle (Michael Mealor), but her feelings may run deeper than she realizes. As Kyle moves on with Lola (Sasha Calle), Summer could feel lower than ever.

Plus, Summer will inadvertently spill the hookup secret to Mariah (Camryn Grimes). If that leads to Sharon (Sharon Case) being brought in the loop, Nick’s going to be furious. Summer should be distraught if her dad lashes out. Nick had to pay Summer off to keep this secret quiet, so he won’t be pleased when it comes out anyway.

What does all this add up to? The Young and the Restless spoilers say Billy will be down in the dumps and eager to hurt Phyllis. Summer will be looking for comfort any way she can get it. Perhaps a Summer and Billy fling isn’t off the table after all.

In other words, an evening with “Snowflake” could be Billy’s rock bottom! This would be a great way to rev up the tension on Phyllis’ side. She’ll be anxious to make amends with Billy, but what about if he hooks up with her daughter? Phyllis may decide she’s done with Billy – at least for now. It could pave the way for a revived romance with Nick or perhaps Jack (Peter Bergman).