BY hellodrdavis on September 14, 2018 | Comments: one comment
Related : Soap Opera, Spoiler, Television, The Young and the Restless 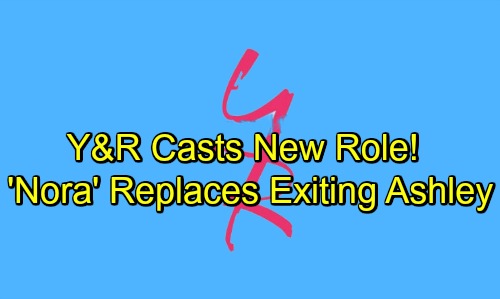 The Young and the Restless spoilers tease that fans can look forward to a new arrival in Genoa City in the coming months. Y&R is currently looking for a series-regular actress for the brand-new role of “Nora” according to SOD.

Nora is described as being in her mid-30s to early 40s, so it sounds like TPTB are attempting to fit the void that will soon be left by Elieen Davidson (Ashley) when she departs the show later this month. Of course, Y&R also lost a major female talent when Mishael Morgan (Hilary) left earlier this year as well, so they’re surely on the lookout for a strong female character.

Where will this new character fit into the Genoa City landscape? Well, the casting description strongly indicates that Nora will be involved at Jabot, the Abbott family cosmetics corporation. Nora’s described as “an uncommon beauty, more amplified by an inner fire and ambition” who “is not formally schooled in cosmetic skills.”

Might she be a chemist, like Ashley? Or perhaps a savvy business woman or consultant who’s brought in to help with Billy’s (Jason Thompson) reign as Jabot’s CEO? That is, if Billy’s still CEO this fall, when Nora is expected to debut. At the rate his gambling is going, he may be ousted by then.

The casting call also indicates that Nora’s “natural intelligence powers an instinct for knowing exactly what makes a woman look and feel great.” So, it sounds like she might be headstrong, which could put her at odds with Phyllis (Gina Tognoni), especially if she’s regularly in Billy’s orbit.

It will be interesting to see who Y&R selects for this exciting new role. Whoever it is, she’ll certainly have some big shoes to fill. Are you anxiously awaiting Nora’s arrival in GC? Stay tuned to the CBS soap and don’t forget to check CDL often for the latest Young and the Restless spoilers, updates, and news.